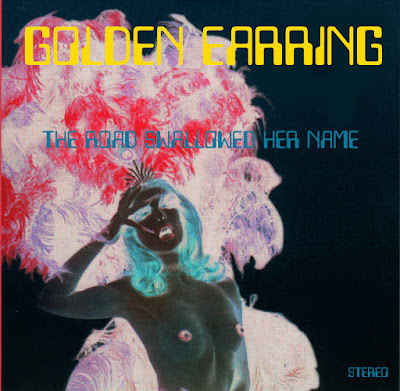 A couple weeks ago a favorite site posted "Golden Earring-The Complete Studio Recordings", and I thought I might as well download "Moontan" as "Radar Love" is a great song.
Back in the day I bought the album, and while I hadn't heard it since "Nevermind The Bollocks Here's The Sex Pistols", I remembered it was pretty good.

The download was bundled with the two previous albums, "Seven Tears"(1971), and "Together"(1972).
"Moontan"(1973) is even better than I remembered. I'd completely forgotten about "Just Like Vince Taylor". I didn't know who Vince Taylor was until The Clash covered "Brand New Cadillac", and it wasn't until fairly recently I learned that Bowie modelled Ziggy on him. While Golden Earring, writing songs in a second language ain't Dylan, it's pretty cool they referenced Taylor in 1973.

It became pretty obvious that "Moontan" was special. The one where everything  really comes together.
I thinks it's on a level with Aerosmith's "Rocks"in transcendending mere Hard Rock. "Radar Love" isn't even the best song. I can't pick one out. All killer no filler.

None of the other albums came close. Clearly "Switch" suffered from tour fatigue and "What the fuck are we going to follow up 'Radar Love' with?"
On "Tons Of Time" it sounds like they think they're playing reggae, but the result is more like Television, which isn't a bad thing.

This mix follows a formula I've used a fair number of times. "Moontan" is at the center, in it's entirety, with highlights from before and after. 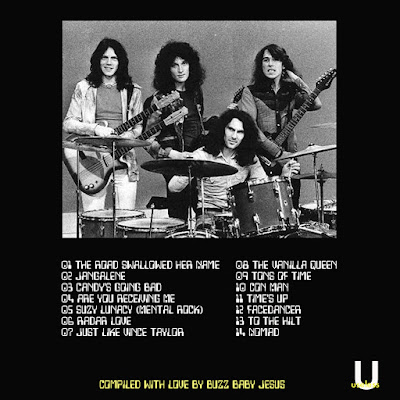 I don't even know their names, but man can they play.
Every song features a riff, a tune, and at least one surprise I didn't see coming. The long ones usually break down into clever prog patches. The coda of "Candy's Going Bad" knocks me out every time.

Like a lot of men's fashion from the '70's, many Hard Rock singers sound hopelessly dated and out of style. Barry Hay is not one of those.

I always say no great band doesn't have a great drummer and Cesar Zuiderwijk is defintely one of those. See coda mentioned above.

Classic Rock at it's finest.

The Road Swallowed Her Name

The Road Swallowed Her Name Too


Posted by buzzbabyjesus at 7:42 AM

I am looking forward to checking this out as I know nothing besides "Radar Love" and "Twilight Zone" so it'll be interesting to see what else I've been missing...

Back in the 70s a friend of mine used to go on and on (and on) about the Earring - as well as a bucketload of German & other continental European artists (so tres avant-garde of him) - to such an extent that I deliberately avoided giving them even a fair listen! A decade or two later I finally gave in and was more than pleasantly surprised with what I'd been missing. "Moontan" is a classic & there's more from where that came from. Thanks for the mix & the reminder. Cheers!