"This Ain't No Monkeying Around": THE WEEKEND MIX 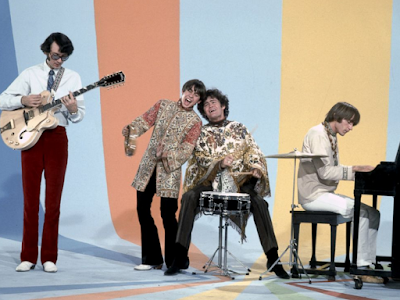 It was only a few weeks ago that I had two separate conversations with some friends who love all music, but who also claimed to know little about the Monkees music other than the hits. One said, "I had no idea just how good they were." Another said, "I just never bothered." Maybe it was the wacky TV series that turned them off. Or possibly, the hits themselves, though wonderful and hook-laden, a bit lighter than some of the deeper tracks that showcased Mike Nesmith's songwriting and great vocal harmony of all four members. Whatever it is, The Monkees never seemed to get the respect that so many of their peers had gotten during the heyday.

Things have changed, and The Monkees, 50 years later, are definitely getting respect. But there are many who still have no idea what they sound like beyond "Cheer up sleepy Jean," so maybe this mix will shed some light....and sound.

Here are 18 of my favorite tracks, with only a smattering of hits tossed in to keep things honest.

zip
Posted by Sal Nunziato at 4:50 AM

Nice--thanks for the salutary reminder.

Sal, I fit the 'Monkees Fan' profile this mix is intended for to a 'T'. Great way to start a Friday morning at work. Thanks!! Randy

Blimey! A few nights ago I was trawling through some Monkees' albums thinking there's some choice non-hit tracks well worth giving a listen to - the deeper cuts in other words - and here's your fine compilation to save me the trouble. Great minds think alike (or, of course,conversely, fools rarely differ!). Have a good weekend. Cheers!

Always loved Pleasant Valley Sunday and I recognized a couple of other titles, like She, from albums I had back in the day. Thanks Sal, looking forward to hearing this curated collection.

Always felt that if they were allowed to experiment, they could've put out some good 'late 60's' kind of psychedelia. Tapioca and Magdalena are very under-rated tracks.

I would've love to see the pairing with Hendrix after Monterey. Talk about a show with a varied audience.

Though, with their TV show, it definitely made it hard to look at them as legit rockers.

That GTO though. Now, that is what I remember about them. Legend has it that Hendrix cracked up Peter Tork's real GTO. Oh, the horror.

As the other (only other?) huge Monkees fan here, it's a pretty solid mix and gets a big recommendation from me as well.

If it were me, I might have added the following (going through albums alphabetically and leaving out the hits entirely and giving Davy a bit more love than Sal did...)

Me & Magdalena (version 1 -- hah)
Porpoise Song
As We Go Along
Daddy's Song
Forget That Girl
Early Morning Blues And Greens
Shades of Gray
All Of Your Toys
All The King's Horses
If I Ever Get To Saginaw Again
Propiniquity (Missing Links 3 version)
Love To Love (either the ML3 or Good Times version)
Saturday's Child
Sweet Young Thing
Look Out (Here Comes Tomorrow) -- IMO. Davy's finest Monkees vocal
Sometime In The Morning
The Door Into Summer
Love Is Only Sleeping
Cuddly Toy
Words
Christmas Is My Time of Year

Man -- that's a lot more songs. And non-hit songs, too. I only meant to suggest a few, but once I got started...

What a great set of records!

What a nice surprise! Thanks!

"What Am I Doing Hanging 'Round" was on My "Trucker's, Etc" Country Rock Weekend Mix a while back.

They got a bad rap for being a "put together" band on a TV show, and not playing the instruments on the records.

Now that we know that everyone, including the Beach Boys, employed studio musicians we can better appreciate their music for what it is.

The Monkees are cool.

Why does everyone neglect "A Man Without A Dream," a fantastic Goffin-King song with a killer vocal by Jones? And some great drumming.

Maybe I'm the only one who likes it? Or maybe it gets overlooked because it's buried on side two of one of their lesser-loved LPs, "Instant Reply." Either way, people should give this one a listen. There is more there than meets the ear at first. Also, King did this one on her first solo album with the band The City, so she must have felt strongly about it. But I think The Monkees do it better.

I think Instant Replay is one their greatest. I've got three tracks from it, four if you count Someday Man. Just went with my heart here, which actually could have just been the Instant Replay record. It's been on very heavy rotation for about two weeks now.

Bones Howe's production on some of those later Monkees songs was a turn-off for me. The liberal use of horns never clicked for me (unlike the exact same production on those great 5th Dimension records.) Couldn't really tell you why, either.

If they every get around to doing one of those 3-disc box set for Pisces... maybe there will be the version of AMWAD that was supposedly attempted back then that might be interesting to hear with a different producer.

My big problem with Instant Replay is the song it starts off with -- and the song it ends with.

There's a lot of good stuff in the middle, though, but every time I put it on, I hated Looking Glass and when it got to the end of side two, "Shorty Blackwell" made me not want to put it on again.

I think there's one *really really solid* album if you take the best tracks from "Present" and IR and put them together, though.

Looking forward to this! Thanks!

Another fan of "A Man Without a Dream," and I agree that the Monkees' version has it all over The City's. But at heart it is a soul ballad, and I prefer Ben E. King's version and especially the Righteous Brothers version, which demonstrates the heavy Curtis Mayfield influence: https://www.youtube.com/watch?v=WguPWE9-VwI

Nicely done! You know, Michael Nesmith went on to a pretty critically-lauded (if under the radar) career, which showed, retroactively, that there was a lot of talent there. And that most recent LP of theirs - a LOT of excellent songs on it. I dig it!

Hey, I thought I WAS showing them respect by touting/loving their hits even before the MTV-fueled re-appreciation began of same hits. Delighted to know there's a lot more to explore. Beyond this compilation, what are the three best albums to begin with? (Not including their latest Good Times which is great.). Thx!

Headquarters seems to be a lot of people's fave.

Instant Replay has become my fave, at least this month.

Headquarters is my fave bar none. Warts and all. Missed drum beats, off-kilter background vocals -- but it's got energy to spare.

For the third, it's a toss up: All the *songs* on "Head" -- are great. The comedy/noise bits -- not so much. But it's 6 dynamite songs. All 6 of these songs usually end up on Monkees compilations I have made.

"Missing Links 2", though -- is *incredibly solid* for a collection of alternate/unreleased material. ML1 was kind of meh and when they announced ML2, I feared they were scraping the barrel, but it's dynamite and what ML1 should have been. ML3 is better than ML1, too.

"More of the Monkees" has the world worst song in "The Day We Fall In Love", but otherwise stands up to repeated plays (and has two monster-smash hits on it!

Thanks for the 'smattering'. It's past time for me to go back and have another listen to some of their songs again.
~j.