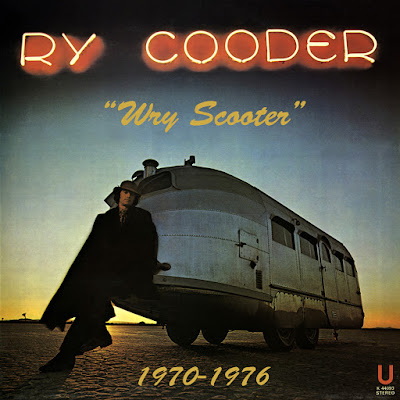 Me and Ry go way back.
So far back that it's hard to pinpoint how or why.
I'm an only child, so no older siblings, or friends clued me in.
I grew up in Southern California, where most of my environment was built in the '60's and '70's.
The oldest buildings in nearby Los Angeles were constructed around 1920.
I went to brand new Middle and High Schools.
Maybe that's why I found a series of Time-Life books in the library entitled "This Fabulous Century" so fascinating, particularly the 1920's -1940's.
I loved old movies, which local TV stations used to fill air space.
I discovered thrift stores and bought a fedora. I tried to carry a pocket watch.
After The Beatles broke up I was a little lost, and short on cash, so I began sending off for Warner's Loss Leaders, starting with the 3 record set "Looney Tunes and Merrie Melodies".
That's where I first encountered Ry Cooder.
His album covers really caught my eye, so I bought "Into The Purple Valley" and was hooked.
So much so I wanted to be Ry Cooder.
He's the reason I bought a pawn shop banjo mandolin, and received Jerry Silverman's "Folk Blues" as an 18th birthday gift.
His mandolin playing is distinctive, and bears no resemblance, thankfully, to Bill Monroe or Bluegrass.
I regrettably lost the mandolin as part of a trade for my first pawn shop electric guitar, but I still have the book. I learned to play the intro to "Ax Sweet Mama" at least.
Typically for me, I loved his first few albums, and then he evolved, and I didn't follow.
Gone were the Depression era down home blues in favor of too many accordions and a more modern sound.
Not long after that Punk happened, and that was that.
I loved his soundtrack for Wim Wender's "Paris, Texas". Those of you familiar with it will recognize "Dark Is The Night", from his eponymous first album, as familiar territory.
Ry's not a great singer, but I believe him, and he's probably my biggest influence as a player of stringed instruments, although if you heard me you'd never know.
Two things I learned from wikipedia while doing research for this post:
He started playing guitar at age three, and has had a glass eye since he was four, when he accidentally stuck a knife in his left eye. He found the blues early. 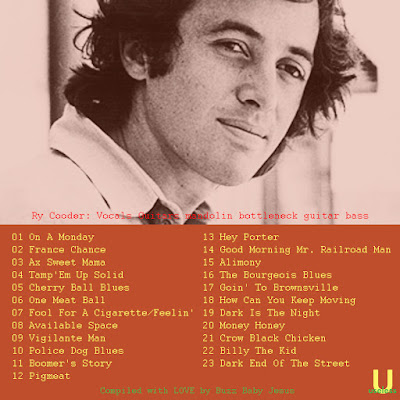 This music has aged better than I have, and is never to far from my ears..

Enjoy!
-BBJ
Posted by buzzbabyjesus at 5:51 AM

Nice set and yer doing the goddesses work, BBJ,keeping the lamps trimmed and burning; thanks. This place/space/whatever remains a daily go-to and I am grateful.

I worked in the other direction with Cooder, so I have great affection for the accordion stuff; the '82 live album with Flaco Jimenez, the operatic "Chavez Ravine" and his guitar duet album with Manuel Galban, "Mambo Sinuendo," are all great records. "Buena Vista Social Club" is no longer everywhere all the time, but it still bears repeating that Cooder basically invented world music as a genre with his albums with Gabby Pahinui and Ali Farke Toure. The one that throws me is "Bop til You Drop," which was proud of its digitalness; seems out of place between the roots albums and his later work.

Good choice. An under appreciated artist to be sure. I wouldn't dismiss his recent work either—not all great, but a lot of worthy material and some interesting explorations.
But why the sideswipe at Bill Monroe?

I'm all for "Mambo Sinuendo", and I have "Chavez Ravine" too. His contributions to world music are not to be dismissed. I guess it was "Bop til You Drop" that threw me off the train.

RE Bill Monroe: Bluegrass is an important part of American Music, and Bill one of it's inventors and a giant. But I like Ry's approach to mandolin better.
From his wikipedia page came this tidbit which had Monroe on my mind:

"As a young man Cooder performed as part of a pickup trio with Bill Monroe and Doc Watson, in which he played banjo. The trio was not a success, (“Well, son, you’re just not ready”, he remembered Monroe telling him after the first and only set he played with them), but Cooder applied banjo tunings and the three-finger roll to guitar instead."

Have you listened to Ry's new one? What think you?

One technical hiccup ... track 14 is missing in action from both downloads.

Lots of listening beside ... just thought you might want to know.


Thanks for all your help this week. I'm still crying over that Graham Nash Better Days!

Have a great weekend.

Thanks, Buzz. This fills a gap I've been wanting to fill; but it's sooo much easier when someone else does it for you. And does a better job!

Thanks for pointing that out.

‘If you wonder what his sensibility sounds like when applied to rock ‘n’ roll—one version of it anyway—the most widely known example I can think of comes from the period when Cooder had been hired to augment the Rolling Stones during the recording of “Let It Bleed.” He was playing by himself in the studio, goofing around with some changes, when Mick Jagger danced over and said, How do you do that? You tune the E string down to D, place your fingers there, and pull them off quickly, that’s very good. Keith, perhaps you should see this. And before long, the Rolling Stones were collecting royalties for “Honky Tonk Women,” which sounds precisely like a Ry Cooder song and absolutely nothing like any other song ever produced by the Rolling Stones in more than forty years. According to Richards in his recent autobiography, Cooder showed him the open G tuning which became his mainstay and accounts for the full-bodied chordal declarations that characterize songs such as “Gimme Shelter,” “Jumpin’ Jack Flash,” “Start Me Up,” and “Brown Sugar.” The most succinct way I can think of to describe the latticed style that Keith Richards says he has sought to achieve with Ron Wood is to say that for thirty-five years the Stones have been trying to do with four hands what Cooder can do with two.‘
- excerpt from a New Yorker article on Ry: https://www.google.com/amp/s/www.newyorker.com/news/news-desk/ry-cooders-elegant-indignation/amp

Thanks for this weekend’s mix, BBJ!

Nice! I've heard about Ry for years, but don't really know his music... this will help a lot. Thanks for making it and sharing, BBJ.

Ha! Your line "he found the blues early" is deadpan funny. I came to Ry Cooder via his film scores. Only now with the blessing of streaming can I explore all his work, though I've been paying attention to Chavez Ravine, the duo album, Buena Vista et al. But heck, surely world music has been around since...music? He deserves credit for popularizing those artists you mention but with the Stones and Simon & Garfunkel and the Beatles trumpeting world music decades earlier, not to mention Hawaiian music's influence on guitar sales etc etc I'd say it predates Cooder. But maybe you were making some more specific point? Hi Sal!

Yes, what a legacy. Boomers Story and Paradise and Lunch the standouts for me. Some of his output (and his own writing) leans a bit too far to the right on the misogynistic scale for me. No argument re his playing though. I love the solo on John Hiatts Lipstick Sunset. I'd love to know the story on why Little Village didn't work. On paper it should have been great. Great compilation... looking forward to deep listen! I didn't know he had a new album out, so thanks for the heads up JAYESEMM.

I've always enjoyed the early Ry sides, thanks for this. Middle period Ry is darned good too.

Ry's on tour this summer.

Have been listening to Ry since "Paradise and Lunch."
Will be spinning this a lot. Many thanks.

What an awesome mix - Thanks. I have turned so many people on to Ry Cooder over the years.

Thanks for the great Ry mix. Question: Are these tracks from a specific remaster? They sound way better than the discs I have.

No. They are ripped from cd's. I brought them into Sound Forge and made the relative volumes match, and a little louder, but no compression or anything. Then converted to mp3.