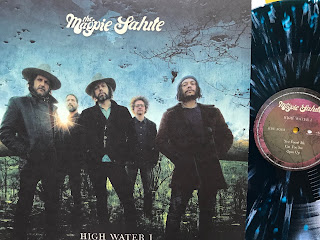 Chris and Rich Robinson will most likely never make music as The Black Crowes again, but Rich, along with some Crowes alumni, is trying to keep that spirit alive with The Magpie Salute. Their first release was a live affair, offering reworked Crowes favorites and some choice covers. It was a terrific record that truly captured what was so great about being at a Black Crowes show. The one original was also a strong piece of work.

Now, "High Water I" has arrived, the all new, all original studio recording from The Magpie Salute. What is going on here over 4 sides of vinyl, feels like what was happening to the Black Crowes around their third record, "Amorica," only with more focus. As much as I loved their debut for giving us their best Faces and Stones impressions, I wasn't unhappy to hear the sound of "High Water I" covering more musical territory without extending the length of the songs. "Amorica" is a fan favorite, just not this fan. Most of the tunes here run less than four and five minutes. Vocalist John Hogg is a powerhouse, with a bit more soul than Chris Robinson. He rarely employs the CR screech to get things across.

This record is called "High Water I," with a "High Water II" already slated for release. My one complaint, which seems to always be my complaint these days, is that when Magpie tries to sound like the Black Crowes, the songs almost sound like parody, and when they don't try, the songs feel more like ideas. That's not necessarily a bad thing, but maybe one record called simply "High Water" with only the ten strongest tunes would have been the smarter route. Not everything works here, but I have a feeling it might be a grower. 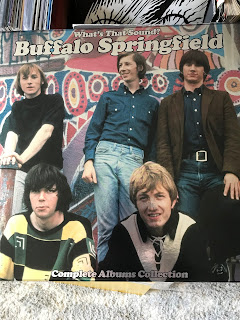 The Buffalo Springfield boxed set that was just released is, in a word, stunning. I was lucky enough to get a pre-order price of $58.99 for five LPs. That is $12.00 a record, which includes a stereo and mono version each of the first two, and a stereo version of "Last Time Around." The vinyl pressings are high quality, and the mono remasters blew my mind. I am sure the CDs will sound just as impressive, if not more so to some, but I can't deny the beauty of the packaging and the personal thrill of dropping the needle on these babies and hearing some of the cleanest versions of these classics I have heard in ages. 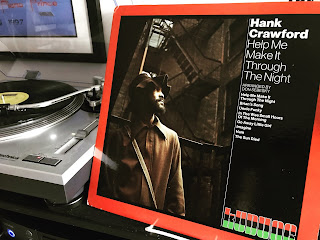 I am not a fan of the type of jazz found on the CTI and Kudu labels in the late 60's and early 70's, but I decided to give this Hank Crawford record a spin. It was part of a much larger collection I picked up this weekend and I was intrigued by both the band members and songs performed. "Help Me Make It Through The Night" is the perfect blend of cheese and groove. A roster of amazing players including Ron Carter, Richard Tee, Cornell Dupree and Bernard Purdie, turn AM Top 40 of the day into a Vegas lounge act with incredible chops. Kudos to arranger Don Sebesky for suggesting the Purdie Shuffle behind "Go Away Little Girl." Or, maybe Pretty Purdie himself demanded it. Either way, this record is a blast. 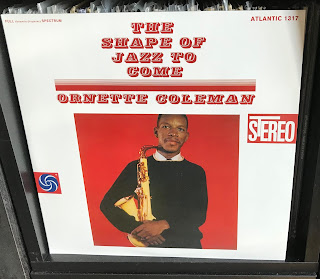 Ornette Coleman also got the boxed set treatment with "The Atlantic Years," a complete replica of the master's entire output for the label, with a bonus LP of outtakes, previously only found on the CD set of many years ago, "Beauty Is A Rare Thing." This one ain't cheap, but from the sound of the mastering, the detail in the jackets and the whole package itself, one has nothing to complain about. The music has never sounded cleaner. Ornette Coleman's music isn't for everyone, and I am still not sure what I am listening for every now and then. But records like "The Shape Of Jazz To Come," "Change Of The Century" and "This Is Our Music" are legendary for a reason. Same could be said for "Free Jazz," but I have yet to wrap my ears around that one without wanting to break dishes.
Posted by Sal Nunziato at 6:47 AM

"Cheese and groove" - what a great description of the Creed Taylor sound. I have a lot of respect for what he accomplished at CTI/Kudu in retrospect. He kept a lot of musicians recording who might have gotten left behind in fusion's wake. My faves were the Joe Farrells (especially the "Moon Germs" album), the Grover Washington takes on Marvin Gaye, Johnny Hammond's "Who is Sylvia?" and that CTI album art. Didn't know this before, but apparently Taylor single-handedly brought bossa nova to the US.

You sent me right to the Magpie Salute. I'm listening right now

I am really enjoying the Magpie album. Only song I don't like is the one that opens the record - Mary The Gypsy.

I think you're onto something if this is going to be a new (occasional) series.
The Buffalo Springfield looks mighty nice.

Well, now you got me thinking about the Buffalo Springield set... I already have the previous Box Set from them and love it. Not sure if I can move forward on this, but it sounds tempting!

The Buffalo Springfield set is fantastic. I can’t believe I got it for around $60. I have only listened to the Magpie Salute once and it was...OK. I really liked the first one so I think it may grow on me. You are right about maybe editing the two down to one. Far too many albums suffer from being overly long. There is still that "fill the cd" mentality out there. Get those records under 45'...

Really enjoyed the latest from The Magpie Salute. iTunes subsequently suggested JJ Grey & Mofro and I became addicted to their catalog. And all this pleasure in my life originated from your recommendation, Sal. Thank you, sir!