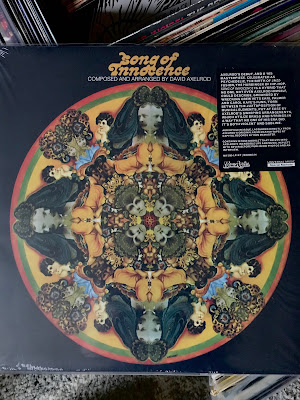 From the hype sticker on the new reissue of David Axelrod's debut, "Song Of Innocence":

"...celebrated as psychedelic, the birth of jazz-fusion, the harbinger of hip-hop, a hybrid that no one, not even Axelrod could describe."

I have somehow managed to never hear a note of this record in the 50 years since its release. But the recent reviews of this anniversary edition, the record's reputation, and the fact that I love David Axelrod as a producer, specifically the records he made with Lou Rawls, made me finally decide, it was time to go in.

What we have here are members of The Wrecking Crew at their finest, anchored by the rhythm section of Carol Kaye and Earl Palmer. Rhythm sections are often taken for granted, unless you are a bass player or a drummer intently focused on those instruments, specifically listening for a Stanley Clarke slap or a Keith Moon fill. But here, the music is propelled by Kaye and Palmer and it is something to behold and hard to ignore.

Parts of "Song Of Innocence" remind me of those great movie and television soundtracks by Lalo Schifrin and David Shire. The record feels very cinematic and it is incredibly percussive, yet there is so much space in the arrangements and production, it manages to miraculously feel precious and never pretentious. You can easily fall into a gulf of brass or strings, which can be breathtaking. This suite, based on the writings of William Blake sometimes veers into funk and fusion. Sometimes, the music swings. There are also moments of complete insanity, as well as these enormous sweeping passages of beauty- think James Bond meets The Beach Boys "Smile." Or, "California Dreaming" meets the Manson Family. "Song Of Innocence" is nothing like anything you've heard before.  As the sticker says, it is both "violent and sublime." And most important, it is always musical.


I am blown away by David Axelrod's work here.  And for you vinyl freaks, this new pressing was cut from Axelrod's original EQ'd masters and the audio is stunning. This is the first of the trilogy, which includes "Song Of Experience" and "Earth Rot," two more records I have yet to hear, but look forward to as soon as humanly possible. 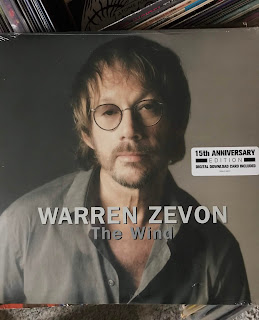 This is more of a public service announcement than a review. Warren Zevon's wonderful final recording, "The Wind," had a short vinyl shelf life when it was first released. Original copies fetch up to $300 or more. A 15th anniversary vinyl release quietly came out last week and it's an affordable $20, for those who want to enjoy this record the old-fashioned way. Solid pressing and packaging, too. 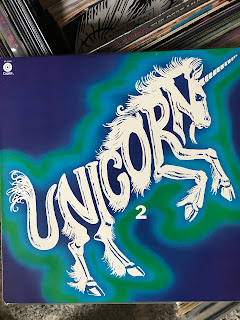 Omnivore Records sent out a press release a few weeks ago about their upcoming collection of rare Unicorn demos, produced by David Gilmour.

Huh? Unicorn? Another one that got by me. I did some research. Dave Thompson wrote this about Unicorn's sound for AMG:

"Lindisfarne before they got desperate, or The Beatles if Ashley Hutchings had produced them, this is British folk-rock at one of its most idiosyncratic extremes. On the one hand, Unicorn's roots in the sounds of the American West Coast are unmistakable. But, on the other, they never forget their English roots and, mindful too of their familial links to Pink Floyd. Like a great Al Stewart album, with the Flying Burrito Brothers behind him."

Wow, easy there Dave! In truth, all of what Dave Thompson wrote above is somewhat accurate. It was part of his review for Unicorn's second album, "Blue Pine Trees," which he thinks is their best. I found both in a used record store recently, and listened for the first time. I liked "Blue Pine Trees" just fine. But I, like most, also according to Dave Thompson, found their third (and second in the U.S.) to be better.

Both were produced by David Gilmour, and as a matter of fact, "Unicorn 2," first released in 1976, includes the original "No Way Out Of Here," which Gilmour covered on his first solo album. There is a great vibe happening on "Blue Pine Trees," but too often to my ears, that's all that's happening. A vibe. Good songs, but not great songs. "Too Many Crooks," as it was called in England, really sells that vibe with more hooks and stronger songs.


I was pleasantly surprised by both records, yet again, an example of how much good music is still out there. My first thought about Omnivore's demos collection was, "Why?" But after a few spins of these two gems, I am more interested than I had been. Maybe some stripped down versions would change the Laurel Canyon vibe to English folk, which always works for me.

Thanks for the heads up on the anniversary version of The Wind. The others didn't sound like they would necessarily fall in my wheelhouse, but WZ always does. The Wind was a great closing chapter from one of my all-time favorites.

A lot to unpack. As a member of the rhythm section, I love David Axelrod's production, and bought a used compilation at NYCD in the early aughts. This sounds fantastic.

I don't know how I missed Unicorn, but it sounds like it's something I need.

I really liked Warren's first one, but didn't like "Excitable Boy" nearly as much. I totally lost interest by "Bad Luck Streak In Dance School".
I've never heard "The Wind". I find the whole idea painfully sad. I have "Life'll Kill Ya" with "My Shit's Fucked Up" and I can barely listen to it now.

Thanks for reminding me of David Axelrod's albums - I used to listen to some of their tracks on Epitonic's website, but they've been out of business for ever. Axelrod used the crazed guitar solos again on the Electric Prunes' "Mass" and "Release of an Oath" albums.