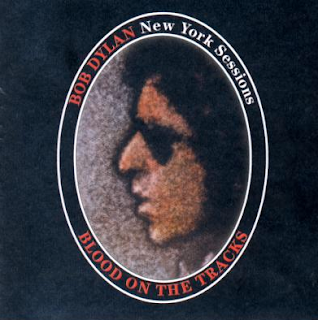 There was a piece in the New Yorker this week titled "Bob Dylan's Masterpiece, Blood On The Tracks, Is Still Hard To Find." It was written by Alex Ross and he offers this, among other things:

Last month, Columbia issued “More Blood, More Tracks: The Bootleg Series, Vol. 14.” Available both as a single-disk compilation and as a six-CD “deluxe edition,” it is both more and less than what Dylan obsessives have been tiresomely clamoring for. The logical move would have been to include the entire album in its initial guise. Yet the single disk gives you only two of the test-pressing tracks, alongside some admittedly riveting outtakes. The box set has all of the discarded tracks, but they are scattered through a complete chronological survey of the four days of sessions—five and a half hours of Dylan at the height of his powers. You will have to study the track listings to assemble the original record. The elusiveness of “Blood on the Tracks” has been integral to its allure, and so it remains.

I am not a fan of assembling things, but this is something I could not resist. Ross also made it very easy with these instructions:

But I have a question. Am I to understand that according to the track notes, Dylan was already "remaking" what would have been the original release of the "New York Sessions?"

Excellent rabbit hole down which I'm jumping! I've struggled with how to deal with the new release and all the various versions.

Thanks Sal, Thanks Alex.


A technical hiccup ... the zip file only has nine tracks; we Burning Wood OCD types might freak out :-)

The zip has been fixed. Sorry about that, Chief. Try it again. It's not a clean fix, as I have to run out, but it is complete.

The boot I've had all these years has a different "Idiot Wind", which I prefer to the one on the 1991 Bootleg Series box, which this box set is the one from the test pressing. Maybe they're wrong, maybe I've been lucky to have the one I know instead. (I can't help it if I;m lucky.)

Anyway, I maintain that the "Idiot Wind" from the test pressing is Disc 2 track 11. The key difference is the way he sings "why go on, what's the use"; much softer, more resigned in the the earlier take than the strangulated one on disc 5.

I thought "Up To Me" was originally supposed to be on it.

I'm confused as well. But I also thought "Up To Me" was dropped at the last minute

Got it -- thanks Sal

Amazing. Dylan could no wrong during this time and these tracks show the power of his genius. This is going to make a great weekend listen. Thank you.

Maybe I didn't understand your question? According to all the stories about this release and the mythology around the bootlegs (which normally I know nothing about, afraid to go down the rabbit hole for this very reason). Dylan recorded the entire album in a classic, spare, mournful fashion. It was done. Depending on the anecdote, he played it for his brother who said "It's great, it's brilliant, but it won't be a hit!" This of course was Dylan at his low point in terms of sales and critical respect, with some folk thinking maybe that motorcycle accident spelled the end of Dylan's artistic achievements. Said bro helped slap together a house band in Minneapolis and Dylan promptly recorded a bunch of the tracks, creating an album that was notably more polished and "up" (only in comparison). And that's the album we know, a glossier (by Dylan standards) remake of the album he had completed and all but released. The "Bootleg" New York sessions circulated ever since, and that plus the Basement Tapes made bootlegs the lustful things they are. Albums never released! Albums in radically different (and some would say better but def DIFFERENT form)! Unlike the Beatles White Album boxed set, Dylan only allows a handful of tracks to stream from his elaborate boxed sets. But what luck! On Spotify he has the alternate album that has been such a fabled thing, offered in full on its own disc if you plunk for the CDs. But NO! Turns out it's more like Paul McCartney's Naked Let It Be. It's a new version of what might have been, rather than the original version we've longed for all these years. I didn't know that, I listened to it and I loved it. Fascinating how a different emphasis on a word here or a slightly different rhythm there can make a song sound so subtly fresh and different. To me the boxed set re-thinking was terrific to hear -- kind of like seeing Dylan in concert in an acoustic setting while he's still figuring out these songs. I was bummed to realize it wasn't the fabled version. So BLESS YOU for making it available.

I remember reading years ago that the entire album was re-recorded with a different band, but that's about it. Thanks for this assembly, I wasn't interested in the full box set with false starts, etc., so this will be great. I was able to stream & grab "Up To Me" here https://www.dailymotion.com/video/xxo1uu that should be enough.

I have always loved BOTT as it was released, but also enjoy many of the New York recordings. I haven't heard the new box set, but it would be great to have the supposed original to give it a listen. No matter what version, Bob was operating at an intensely high level of creativity that year and simply couldn't stop working on this set of songs. I don't think he reached a comparable peak until Love and Theft, but that's just an opinion....