11 years ago I  reunited with a college crush, and in the process acquired a seven year old daughter.
It didn't take long to realize I couldn't say I hate Christmas anymore, or that I find Christmas music so loathsome it makes me angry, or that "Jingle Bell Rock" just might be the most offensive piece of shit ever written, and that Hall & Oates version, in particular, occupied a special place in Hell's jukebox.
At just the right moment I found myself in front of a wall of TV's when that very song came on.
I stood there, ready to fully enjoy hating every smarmy second of it.
That I wasn't a fan of H&O's oeuvre was an understatement.

Instead I experienced a sudden paradigm shift and was dumbstruck by it's charm and utter perfection as a piece of popular art.
I'll even watch "Live From Daryl's House" now.
Returning home I quickly acquired "Jingle Bell Rock", and set about making our first annual Christmas mix. We shot a "fun" family portrait for the cover, made 50, and mailed them out to friends and family.
I've made seven so far, with some years skipped due to lack of inspiring material.
I usually begin by finding a first song, and this time it was JD McPherson's "Socks", from his truly excellent album of the same title.
An instant classic that will even sound good in July.
I stumbled across a wealth of new Christmas releases by the likes of Rodney Crowell, The Mavericks, Los Straitjackets, The Monkees, Loretta Lynn, and Cheap Trick
Everything fell into place pretty quickly. 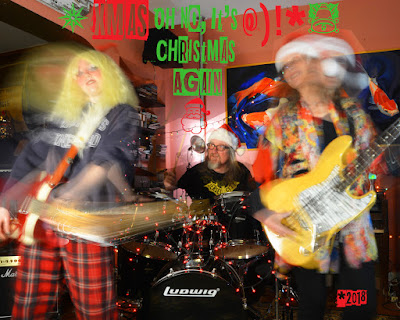 We usually shoot the family portrait in the dining room, but now it's full of recording gear (long story), and the living room is dominated by drums. So I got the idea of exploiting the situation by "forming" a band. (My mom doesn't gig with us anymore but does her bit in the studio) 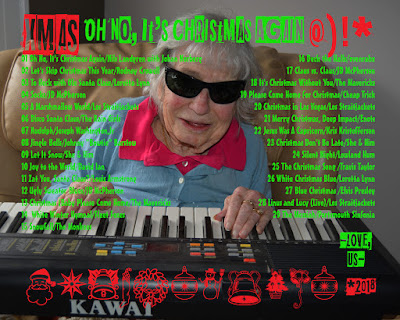 I hope everyone's Holiday is Happy!

Oh No, It's Christmas Again!

Oh No It's Christmas, Too!
Posted by buzzbabyjesus at 6:59 AM

Great great great !
Thanks for the effort!
Grabbing it now.

Thanks so much. Now I am ready for the holidays.

Thanks so much, Mr Buzz!
I'll be heading down to the basement later today to find the ornaments and the lights and the box of Christmas CDs. This will be a great supplement to the same two dozen CDs we've been playing for years.
Also recommend internet radio's soma.fm especially their "Jolly Old Soul" and "Christmas Rocks" stations. (somafm.com)

Over the years with a few friends we have swapped Christmas Mixes, this is a very welcome addition to the collection. Thanks. May your 2019 be filled with good music and good friends.

Many thanks for the mix. Always good to hear some Christmas-themed songs which are an alternative to the usual suspects. Guess I'll hold back on the "Bah, humbug!" a while longer. Cheers!