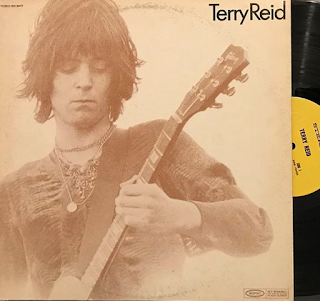 TERRY REID, 1969
Once upon a time, there was a guy named Terry and he sang quite well. Rumour has it that Jimmy Page asked him to be in a new band he was putting together in 1968. Terry said, "No thanks, dude. I just got a record deal." Jimmy's new band, Led Zeppelin, put out their first album the same year as Terry's. One of these albums sold quite well. 8 years later, a little band from Rockford, Illinois covered a song from this album, "Speak Now Or Forever Hold Your Peace", on their debut LP, which is where I (a wee lad, also from Rockford, Illinois) first heard about Terry. Cheap Trick's debut album sold quite well, too. Poor Terry. Jimmy and Cheap Trick were onto something. Mosey on out to the Manchester Army/Navy Record Show - Fall 2018 on Sunday, and take Terry home with you. It will probably be the best decision you make all day.

just wanted to say how much I agree with Sal and look forward to these reviews,

Back in the day I bought Terry's album because of Cheap Trick's cover, and was terribly disappointed. It suffers from Mickie Most's cheapo production and I just couldn't get onto it.

Never cared much for Terry's '60's output because of the shitty production but beginning with River his '70's albums are pretty damned solid. 1991's The Driver had it's moments but once again suffered from bad production.

Led Zeppelin would still have been a great band with Terry on board - what a voice!!

And you have hit the sweet spot again. Agree re the production values... but Superlungs....!!Yes yes yes.

....and favourite track "Friends"... yes I know its not on this album!
and had Reid joined Led Zep it would have added not just his amazing vocals but another ( pretty good) guitar player....interesting!

How can you not love someone who covers Bang, Bang (My Baby Shot Me Down?