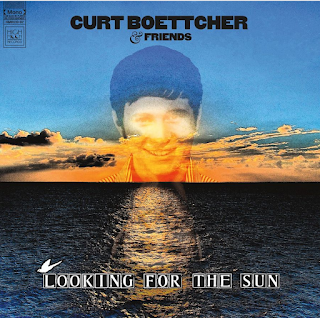 "I'm over at a studio with Brian Wilson. I heard a sound and Brian looked at me and said, 'What is that?'" That was the first time I heard Curt. That record stunned Brian. All he tallked about for a week was that song and that kid."
-Gary Usher, Producer (The Byrds, Beach Boys)

That is taken from the hype sticker of the just released "Looking For The Sun," a brilliant 18 track collection from Curt Boettcher & Friends.

If you've paid attention, you'd already know that I have a mild obsession with The Millennium, Sagittarius and the late 60's sunshine pop that occasionally veers into psychedelia, and Curt Boettcher is the madman behind much of it. At the root of these tracks you will find mellifluous melodies and harmonies rivaling some of the greatest AM radio singles by the likes of The Association, The Fifth Dimension and even the Beach Boys, often given what can be best described as a drug-induced makeover. At Boettcher's best, he produced some of the greatest records in pop history. At his worst, and this is strictly in the ear of the beholder, he sabotaged what might have been an historical run of hits with production that was just too audacious for radio, leaving a good number of masterpieces to disappear into oblivion.  Not everything works on "Looking For The Sun," but every one of the 18 tracks is a mini work of art, for better or worse.  "Looking For The Sun" is never boring.


Keith Colley's "Shame Shame," features Glen Campbell on guitar and harmony vocals, with an arrangement by David Gates. Actually, most of the tracks feature members of the Wrecking Crew, as well as Sagittarius and Millennium alum, Sandy Salisbury, Michael Fennelly and Lee Mallory.


I highly recommend this set, which is an affordable way to get your hands and ears on some of the rarest 45's out there. It is also a terrific entry into the genius that is Curt Boettcher.

I'm unfamiliar with these bands, so looks like something good to dig into.

Liked first one (and downloaded it), didn't care for next two, and the fourth was unavailable for view (and as such, I couldn't even see what it was called so I could seek it elsewhere!).
I like that era/area's music a lot, too.
Welcome back!
C in California