What I Did during My Summer Vacation

Hi, my name is Jeff, and I am a Woodstockaholic.

I didn't go to the original concert, but I listened to it on the radio while sitting on my bed at summer camp in Connecticut, wishing I could sneak out of that particular hell and find my way to heaven. Instead, I could only listen to pieces of it that appeared on the news or from one of the local stations with a reporter on the site. The good news is that just a few weeks before, we were allowed to go to Tanglewood for one of the greatest shows I've ever seen: a triple bill of B.B. King, the Jefferson Airplane, and the Who, who performed "Tommy" in its entirety.

Since the concert, I've tried to satiate that great hole in my teenage life by seeing and owning every broadcast, film or recording of the concert I could get my hands on. That included, of course, going to the movie in the theater with my parents (my dad referred to Ten Years After as "Ten Long Years"), owning the record of Woodstock 1, then Woodstock 2, the VHS, the DVD, the Director's cut, the 40th Anniversary Director's Cut on Blu-Ray, an untold amount of bootlegs of the concert itself and individual acts, then the Rhino collection that came out several years ago and the 10-disk "Back to the Garden" collection that came out this year.

There are also the books, two terrific oral histories, "Barefoot in Babylon" and "Woodstock: The Oral History." My favorite was probably Eliot Tiber's "Taking Woodstock," about the kid who was one of the unsung heroes in bringing the concert to Bethel. It's not only a great story, but it was made into a movie by Ang Lee. The Nation magazine used it as a fundraiser, and not only was I asked to introduce it, but I also got to introduce the evening's featured speaker, Pete Fornatale, one of my DJ heroes from when he was on WNEW. He and I watched the movie together from the third row, while sharing a bucket of popcorn. He was truly a nice guy, and sitting there listening to his asides was one of the great thrills of my life. 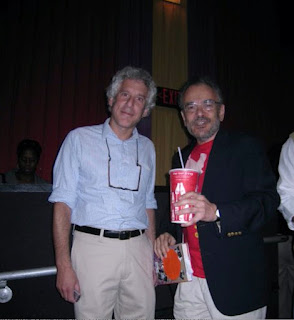 Anyway, this year Rhino issued the holy grail of Woodstock collections: a 38-disc collection of everything, 433 tracks, everything that was heard at the concert from beginning to end. Even for someone like me, there were quite a few revelations, and I spent a good part of my summer uncovering them. Among them:

*Whoever edited the original film made a lot of good decisions. I'm not sure how much I would have lasted that first day, what with having to endure Melanie, Bert Summer, Tim Hardin. Even Richie Havens' performance was well-edited in the film and record to include the highlights and omit the low-lights, such as his rendition of "With a Little Help From My Friends," whose lyrics he couldn't remember.

*The constant stream of announcements remain endlessly fascinating, going way beyond the warning about brown acid. I still wonder whether the woman who left her clothes in the back of the guy's van ever got them back.

*John Sebastian, contrary to what you see in the film, was actually pretty good. He wasn't the stoned wreck the movie makes him out to be. On the other hand, I could have done without Joan Baez's righteousness. And Country Joe's attempts to be a country singer, omigosh, the less said the better.

*The Band wasn't so great, and the Dead's set was marred by major technical difficulties.

There were a couple of performances that I've put on repeat more than the others. Maybe it's just me, but I loved Arlo Guthrie's stoned-hippie story of Passover. Clearly, he was trying out a sequel to Alice's Restaurant. It may be you have to visit the medical marijuana dispensary first to enjoy it, or maybe not. Here's a link to it.

The biggest revelation for me was the Keef Hartley Band. Until Woodstock, Hartley was primarily known as the drummer who replaced Ringo in Rory Storm and the Hurricanes. After Woodstock, well, he was completely unknown because he doesn't appear in any of the official releases, but I loved his blend of hard rock, jazz and every other style he could toss in there. His guitarist, Ian Cruickshank gets in a pretty hot solo hero too. Here's a link to "Halfbreed."
Posted by jeff at 5:40 AM

Nice memories - after all these years, I never knew the concert was on the radio.

I, too, didn't realize it was broadcast. Sorry to hear The Band wasn't that good, as they are one of my favorites from that lineup. Glad you've been able to dig in so deep to something you really love.

Hartley was a revelation to me, too. I've been revisiting his albums on youtube since the discs came out since I like that early UK jazz rock (If, Collosseum, Air Force, Blodwyn Pig).

The Airplane's set is probably the most energetic of the many live sets I've listened to of theirs. And in the morning!

After Big Brother, I wasn't a devoted fan of Janis Joplin, but her set was also a highlight for me. Ditto Johnny Winter - never a fan, but after the "Down and Dirty" doc on Prime and this set, I've been rethinking.

My biggest disappointment was Canned Heat. youtube clips had me thinking they tore the place up, but a combination of having to pee, new members learning material on the fly, etc, made their set a start stop frustration.

I made it to Watkins Glen, but my dad would not let take off on Saturday to head up the NYS Thruway to attend Woodstock. BTW, for Watkins Glen, I had to park my car at least 7 miles away and hoof it up to the concert.

Sorry to hear about The Band's performance. One of my favorite groups and I will be getting their full Woodstock set as part of the 50th anniversary release of the Brown album.

I agree that the original movie did have a great flow to it and made the concert appear to be one continual adrenaline charge.

Having listened to the full CSNY set, I'm not sure why it sat in the vaults for so long. It had a couple of rough spots, but it was really better than I had been lead to believe it was going to be.

(I updated the post to be more clear on the broadcasts: we were tuning to the local news and music stations on the scene who would broadcast a snippet here and there, along with lots of interviews with people in attendance.)

I've always looked back on the movie through rose tinted spectacles, just like the hippie specs with the circular pink lenses I experimented with back then. TYA, the Who, the Airplane, Hendrix, the film blew the socks off my tender young feet - which in the cinema for the midnight screening were over the back of the row in front of me. Smoke filled the auditorium; I was on tobacco, some of the other clientele on headier stuff. Great days through those pink hued glasses & watching the DVD never fails to bring it all back. Cheers for a great post!

I'm Paul and I'm a Woodstockaholic. In college, I had two video tapes and one was the film. I watched it religiously. I collected boxed sets, bootlegs, countless articles and books, studied maps of the grounds, tried putting together giant pictures of where the photos belonged, how the whole thing looked.
I teach a rock history course in a high school. I love getting to Woodstock and Altamont (I'm the closest town to that raceway). I participated in a roundtable panel of educators on a Woodstock at 50 consortium. This Monday, I finally did what I always doubted I would be able to do: I traveled there. Thankfully I traveled from NYC up to Bethel by myself in order to not be an idiot to anyone. I spent the entire day there, visiting the museum, wandering all around the hill of that sacred weekend. I met Nick and Bobbi Ercoline, the couple whose photograph made the cover of the record and later film. I played a Richie Havens song from my phone as I sat on the space where the stage once stood so long ago. Doing this was one of the longest-held dreams and it was worth everything.

hey paul. the museum is great, and they've done a wonderful job preserving the grounds, haven't they? As soon as you walk out there, you recognize it. Woodstock was one such a seminal event. I had tears in my eyes when I walked out there. I should say though that the 38 disks do add a little reality to the whole no violence/perfect weekend thing. First of all, the stage announcers were so furious with the people on the towers, they all but urged people to take care of them. Even Janis Joplin said something at one point about it, that was a bit, like, "If you have a problem with someone, go after them."

There were also some strong disagreements on whether or not the acid was good and bad and real violence against the people running concessions in the back even though they were selling food at cost.

We watched the original movie recently, giving Santana and Joe Cocker the nod for MVPs, while The Who played a lot better at the Isle Of Wight. On the whole, it held up really well.

Jeff - totally agree on all your points, even about getting choked up walking through the amphitheater. We can't be naive to think that people weren't people over that stressful time. Not every band was great nor even "good." Half of the performances were missed as people slept. Imagine the tensions of the planners with all of the mess that went on; only Wavy Gravy was the chill dude. Also, how much of the "behind the scenes" work was done by the women as the men strutted around and "made decisions." That said, I do like what was said that the "miracle" was that the THING happened at all. I'll still include it among my ideals of musical and historical events.

I went to the original Woodstock concert in 1969, I was 17 and hitchhiked from Hartford, Ct
With no ticket and little money, I arrived late Friday, and missed all of Friday's music.
On Saturday I saw most of the acts. My favorite had to be Janis Joplin and The Airplane.
I Managed to get to about 100 feet from the stage. Sunday I saw most of the acts but left
before Hendrix, found someone heading in my direction. Looking back, it was a great weekend.
I went back to the original site for the anniversary concert, on 8-16-19 and saw Ringo Starr, Blood,Sweat and Tears and Edgar winter. This time though I drove up in an old van I purchased just for the trip.