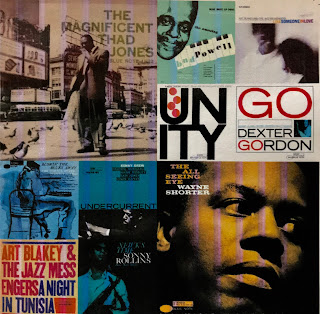 Back in February of this year, Blue Note Records began a series of audiophile releases called the "Tone Poet" series, records from the Blue Note catalogue that cover lesser-known classics and modern-era standouts, all lovingly analog mastered by the amazing Kevin Gray. I read a review of one of the titles, "Contours" by Sam Rivers, and decided to give it a shot. Rivers' Blue Note debut, "Fuchsia Swing Song," is one of my favorite jazz records of all time. "Contours," a 1965 session, was new to me and features Rivers, Ron Carter, Freddie Hubbard, Joe Chambers and what I believe is the very first Blue Note appearance of a kid named Herbie Hancock. To the point, the session killed me, the sound quality of the LP was superb and the packaging was in a word, stunning.

Now this will annoy some of you but, there is something about this series and all I've mentioned above, that just wouldn't do it for me digitally. It's the whole experience of the package, the smell of the vinyl, the needle drop and the warm analog sound. Plus, it's a series. Like baseball cards. Buy one at a time. Collect them all. I still think this whole record collecting thing is fun and what loving music is all about.

Needless to say, I've been in a mood. A Blue Note jazz mood. There is a sound and style that differs from say, an Impulse session or a Riverside session. I thought I'd put together a Weekend Mix of some personal faves. Sadly, I don't have any of the Tone Poet series in my digital catalogue, so none of those releases are included.

I do think what I've chosen for this mix will make some of you very happy.  I don't talk about jazz enough on these pages. That is a choice. Partly because, the rare occasions when I have, response was worse than usual. But also, I don't feel I can write about jazz with the same confidence as I do rock and roll. Maybe that will change in 2020, especially if the response to this mix is more than crickets. I hope many of you take a chance and give this mix a spin. Maybe you only think it wouldn't be for you. And once again may I stress, if you still love vinyl and you love the Blue Note catalogue, dig in to this Tone Poet series. It's the bees knees. By audiophile vinyl standards, the records are not expensive. I just jumped for my next title, Lou Donaldson's "Mr Shing A Ling" for $22.

(CORRECTION: Sam Rivers "Contours" was not Herbie Hancock's first Blue Note appearance. His first was another record in the Tone Poet series, Donald Byrd's "Chant" from 1961. I knew I read it somewhere.)

(I couldn't decide on a Blakey track, so there are two.)

ah, now you've done it, Sal - no Jackie McLean. I teared up when he appeared as a talking head in Burns' "Jazz." you're right about Bluenote - they are the whole package, especially that art work.

ANON,
Jackie was on my last jazz mix...10 years ago! I made sure not to duplicate.

Some great choices here - The All Seeing Eye is one of my favourite albums in any genre, looking forward to the ones I've not heard before.

"Greasy"! Now I'm trying to figure out how long I've been coming here. I think Simels first sent me.

Wow--what a treat. What an eclectic mix of players Blue Note had. I have some of these guys on vinyl but I got into jazz when the labels were all re-releasing their catalogs on CD. But that action also saw some nice used vinyl albums become available in the used-record stores. To be honest I snagged some Blue Note vinyl albums (Dexter Gordon, Bud Powell) not only because I liked the artists but also on the strength of those cool, beautiful covers. It was only by chance that I noticed that the vinyl sometimes sounded better than these CDs of the 1980s.

I'm not telling you anything you and your commenters don't already know--but hey, better than crickets, right? I hope you will post more often about jazz.

My jazz IQ is pretty dismal so this pre-selected mix is just what I need.

Was just flipping through the last few post: Sinatra, the Beasties, the Who, Blue Note. You really should try to expand your listening, Sal... you don't want to wind up one of those old farts in a rut. ;-)

Thanks for the decennial jazz mix. I’m also a rock and roll guy who enjoys jazz, especially hard bop. I’m glad folks are responding to this. I only get to play this stuff in the car if I’m alone. Blue Note was/is an amazing label.

This past year or so, it's been my listening pleasure to wallow in the jazz of the late 50s to middle 60s. Growing up in the 60s, my listening was defined by the Beatles, Blues and Psychedelics. Jazz was always something alien or only reachable through, say, Herbie's "Headhunters" or Jeff's "Blow by Blow."

Maybe it's a maturity thing from years of listening, but that kind of music is now attainable to me. It's not so rare for me to listen to hours on end of the Blue Note, Impulse, et. al. releases. The. English website Udiscover has been very informative to turning me on to this genre. For instance: https://www.udiscovermusic.com/news/blue-note-tone-poet-series-continues-2020/.

We may hate to admit it but that old chestnut of" they don't make 'em like they used to" works for my misunderstanding music that pre-dated the sounds of my youth.

Love the new Blue Note re-issues. Like them so much, I'm investing in an upgraded record player to coax some better sound quality.

Very true there is a Blue Note Sound and for me Art Blakey epitomizes that sound. He always has great players and just swings. You being a drummer you must love how he molds the sound and just leads the band.

I agree. Blakey's records seem to be the most adventurous without crossing that line into free jazz or avant garde. They're big and busy and yet continue to swing and groove.

Thanks for the music. Always ben a big fan of the Blue Note label. Incredible collection of artists and music. F.Paquet

Holy crap, this comp is amazing... honestly, one of the best jazz comps I've heard. I'm DONE with Christmas music at this point in the day and this is what is ringin' out here on Christmas night. Well done!