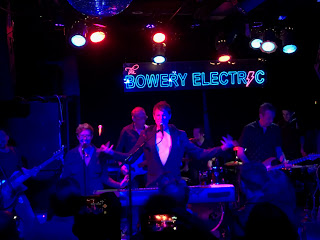 On Thursday evening I attended a show at The Bowery Electric by an octet who call themselves Music For Enophiles. They are a NYC based band solely dedicated to playing the music of Brian Eno, specifically songs from his four pop albums from 1974-1977. While these records spawned no Top 40 singles, and to my memory received very little FM radio airplay, "Here Come The Warm Jets," "Taking Tiger Mountain (By Strategy)," "Another Green World," and "Before & After Science" have become legendary. They are not only cult favorites, but have gone on to influence many, including the two most obvious, David Bowie and Talking Heads.

My mind was blown. I have loved these records forever and the Enophiles pulled this off in spades. If you know and love these records, can you imagine the thrill of the lights going down and hearing a note perfect "Sky Saw" to open things up? I never thought I'd ever hear any of these records performed live. Take a look at the set list, courtesy of my friend Lee Ann F. ("Driving Me Backwards!!) 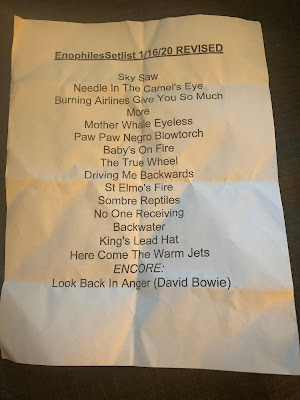 Now maybe you are unfamiliar with these four albums and you are thinking to yourself, "So what?" That's fine, but that is another reason why I am here.

Can you think of another artist's catalogue that has become legendary, either commercially or in cult status, that has rarely if ever been performed live? Brian Eno did not tour, and there are only a few live performances and BBC recordings of this material. There are thousands of tribute bands out there, some covering not only full albums but specific live performances, like The Musical Box who recreate the tours and costumes of Genesis. Keep in mind, I am not looking for bands you never got a chance to see live. Nor am I looking for some obscure band who has a small following. And I am definitely not looking for songs that have never been played live by bands that tour all the time, though that sounds like a fun future post. I want a band or artist you love, with a fairly popular catalogue that has never been performed live.

Whether or not you are a fan of these four Eno records, there is no mistaking their popularity and influence or the  success of the musicians who played on them, like Phil Collins, John Cale, Phil Manzanera, Chris Spedding, Robert Fripp, Robert Wyatt and Andy Fraser, to name a few.

I tried, but came up empty. Music For Enophiles are truly unique and I suggest seeing them live if they come to your town.

Kate Bush? One official tour (only covered the first two albums and was only one month long) and a handful of shows in from 5 years ago in a relatively small setting. And, AFAIK, there are no tribute bands out there (but, really, I don't know everything... maybe there are?).

Definitely meets the "legendary" and "influential" criteria. And "rarely performed live"! She has at least 4 albums that (again AFAIK) never had any live performances of any of the songs done.

(Or does she not count because she *has* done live shows?)

She was the only one that immediately jumped to mind.

Shriner,
Good choice, though less exclusive for the reasons you state. She has toured, albeit not often.

But guess what? The Enophiles also do another show called Kate Loves Bryan, which is all Bush and Ferry.

Growing up in Montreal, Baby's On Fire and The Great Pretender were played in fairly heavy rotation on CHOM FM

"If you know and love these records, can you imagine the thrill of the lights going down and hearing a note perfect "Sky Saw" to open things up? I never thought I'd ever hear any of these records performed live."
I must confess, this (almost) brought a tear to my eye. SO glad you had that experience.
Like Shriner, my first thought was Kate Bush, with the caveats you mention. My second thought was Nick Drake, but that seems kind of unfair, and possibly in bad taste.
There must be some bands who released a classic debut, then imploded? Seems like a common story, but I've had too much to drink to think of any.
Happy New Year, Sal!

Thanks for turning us on to the Music For Enophiles. I'm a huge fan of those four albums as well Brian Eno's extensive musical catalog.
To see more live action, here's the link to the Enophiles website: http://www.musicforenophiles.com/
I was fortunate to see Brian Eno many years ago at one of his art installations in Los Angeles. He gave an amusing talk and then presented his visually oriented art along with a "performance" (consisting of selecting several computer keyboard strokes.) It was a fun evening. Thanks again Sal for bringing this to our attention. Very much appreciate it. Hope they come out to the West Coast.

I'm glad you didn't say "which is all Bush and Furry."

Sorry. I'll see myself out now.

This Eno tribute show/band sounds terrific. I love those albums and think of Brian Eno as one of the absolute giants of recorded music, given his producing credits alone., not to mention Roxy Music, his solo pop-ish albums and helping to invent an entire genre of music w ambient. I had a trippy experience listening to Another Green World on my headphones while traveling from Yankee Stadium back to Long Island City. It seemed like the entire city was in sync w the music I listened to, from the imagery of the posters on train station platforms to the sound of the train itself to the perfect moment when the music seemed to score the train heading into a tunnel. Like numerology, you can find this everywhere when you look but I wasn't looking and it was fun. Eno is a god.

Kate Bush was a great mention, with asterisk, but still. The one that came to mind for me: Nick Drake. I did however, head to BAM and hear Duncan Sheik perform Pink Moon in its entirety. Was that the first time the album was played live in public in full? Perhaps!

May be wrong but I was thinking on Nick Drake. Far from being an expert on his music but I hold his three known LP's dearly and I would not think they were ever played live.
We will never see him in the RRHOF, that is for sure.

I recall seeing 10,000 Maniacs in San Diego prior to their big success. They covered Burning Airlines Give You So Much More; it was a surprisingly good. Of course, the band rocked harder in their early phase.

Hearing those great Eno songs live would be a treat! One of my favorites, 801 Live, has a couple of the Eno tunes.

As another attendee of the Music For Enophiles show last week, I can state unequivocally that it was the best live show I’ve seen in some time. Can’t recommend it highly enough!

The only one I can come up with is Toni Price, a long time favorite of mine from Austin TX. Her material has "rarely if ever been performed live" by anyone other than herself, and she performs almost exclusively in Austin, where she apparently has "a fairly popular catalogue", since she's able to make a living there. Yeah, I stretched your criteria a bit. I don't think she's ever written a song, but she's recorded a ton of great originals by Gwil Owen and plenty of fine covers. I'd recommend every album, but her last one "Cherry Sundae Orchestra" sounds a bit rushed.

I'm not a fan of the cover bands, but Music For Enophiles looks interesting, since I'm not very familiar with his music.