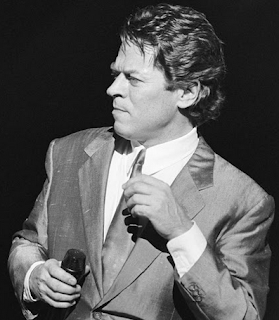 No one was happier for Robert Palmer's MTV success than I was, except for maybe Robert himself. I had been a fan since I picked up his second solo release "Pressure Drop" in the Alexander's record department in Brooklyn's Kings Plaza way back in 1975. As much as I enjoyed those videos and those songs, Palmer was so much more than "Simply Irresistible" and "Addicted To Love," two great rockers that might have failed miserably with another singer and front man.

Here are six songs that you may or may not know.

"Remember To Remember" is a Palmer original that closes Side Two of his 1979 release "Secrets."

"Les Planches" is as creative as the singer himself, unreleased until it became a 2013 bonus on the "Riptide" reissue, it is a laid-back, reggae version of "Some Guys Have All The Luck" sung in French!

"She Makes My Day" was a single that failed to really take off. The melody of the chorus with the overlapping counter vocal is truly a thing of beauty.

"Man Smart, Woman Smarter" is a Jamaican standard getting a patented Palmer groove.

We close with "Through It All There's You," a slow burn funk, with help from The Meters.

Every one of these tracks, like most of Palmer's catalogue, showcases the brilliance of his unique vocal phrasing and his willingness to take the grooves and arrangements sideways.

SIX PACK TRACKS
Trick Bag
Remember To Remember
Les Planches
She Makes My Day
Man Smart, Woman Smarter
Through It All There's You

As of 2/19/20, the site that hosts all of the zip files migrated to a new server. If this is anything like the last migration, all links from the past 10 years will need to be updated. I cannot do this. BUT, will do this on a case by case basis. So, at anytime you attempt to grab a zip, if it says "not found," you must leave a comment and ask for a re-up.

I believe this Six Pack zip is working.

Sal,
I too have been a big Robert Palmer fan since his Island label days. I had a chance to meet him back in the early eighties when I first started working in record stores. He was an absolute gentleman. I saw him live twice around that time. The power cut out and he sang one song acapella with no amplification before the power came back on. John Martyn was there in the bar too that night. One of my favorite tunes of his not featured on any of his own studio albums is his cover of Little Willie John's - My Babys In Love With Another Guy - from the Color of Money soundtrack - it swings/play loud ! - https://www.youtube.com/watch?v=a0D3lk2gS-E - thanks for highlighting this fantastic singer/songwriter/musician/producer.

Brilliant. I played the hell out of Pressure Drop and Sneakin' Sally. I'm lovin' this Sixpack. Off to check out the Little Willie John cover.

Nice selection. Big fan since Sneaking Sally - still a classic album. Proper Yorkshireman.
Saw him once in Dallas in 79. Can't remember a thing except that he lived up to my high expectations. Didn't realise that I had Les Planches but never listened to it... Looking for the Colour Of Money s/track as we speak.
My favourite off piste RP track is his version of Randy Travis' On The Other Hand, with UB40 as backing band - the best place for them.
https://youtu.be/sFu3ImY50W0?t=5275

In 1974 I went to a record store on 6th Ave and Washington Place and "Sneakin' Sally Through the Alley" was playing. I asked the guy at the counter who it was and picked up a copy of the album. I was hooked and remained so until his untimely death. A real original and so cool! Great selection for someone just looking to sample.

Looking forward to this!
(And, sorry about the server flim-flam. Makes me glad I try to download all your posts when they appear!)

Back in 1986, I had an opportunity to meet him at backstage in Tokyo Koseinenkin Hall. He was a very gentleman and thanked me and my friends who were shooting video for his tour in Japan. He has been underappreciated to say the least.
Great selections, Sal!

Thanks for this... and thanks to the other correspondents for the YouTube links. I saw Palmer with Vinegar Joe back when Moses was a boy. Great band on the right night. A great fan of Sneaking Sally era.

Also thanks for the Spotify playlists. I have avoided Spotify for years, (probably for ethical reasons true or false), but now on the wagon - much joy to be had.

Sal, you should check out Todd Terje & Bryan Ferry's cover of Johnny and Mary. It's an absolute peach..just made for Ferry's louche delivery..beautiful and sad.

I know the Ferry cover well. It really is terrific.

You turned me on to Robert Palmer's catalogue a while ago. I love this. thank you!

Wonderful selection, thanks!
Regarding "The Color Of Money", that whole soundtrack is pretty cool!
Now if they only would release those Lee Perry produced tracks...