Happy Birthday, To The Soul Queen Of New Orleans


I don't recall the first time I knew it was Irma Thomas' voice I was hearing. Growing up, New Orleans was a place on the map and people like Fats Domino and Miss Irma were just voices on the radio like Sly & The Family Stone and Sonny & Cher. One afternoon, I was visiting my roommate at the video store he had been managing, and I heard this song playing that, for whatever reason at that moment, sounded like pure heaven. My friend's co-worker Kyle showed me a cassette. "It's Irma Thomas." The song was "Take A Look." That was 1987 and that's when I became a fan for life. That song was played at the right place, at the right time.

I bought this record that Kyle had on cassette. It was a U.K. import on the Kent label, "Time Is On My Side" and I played it everyday, staring at the cover, assuming Irma Thomas was long gone. (There was no Google in 1987.)

The first time I set foot in New Orleans, some twenty-plus years ago, I was overwhelmed by everything: sites, smells, heat, food, booze and music, of course. But the one thing I could not comprehend was that this dream singer named Irma Thomas was not only alive, but owned a club called The Lion's Den and she performed there whenever the hell she pleased.

Since 1999, I've seen Irma Thomas perform live at least a dozen times, mostly in New Orleans, occasionally singing gospel, which is truly an experience not of this Earth, and even once or twice in New York City. I even recall declaring after one particularly moving set, how I felt like Irma Thomas was *the* best female R&B singer. Even better than Aretha! I blame New Orleans for that bit of folly. That city can make you say and do anything. I promise I won't say it again, even if on certain days, I really do think it.

(I took this photo below in the Gospel Tent at the New Orleans Jazz Fest in 2009, I believe.) 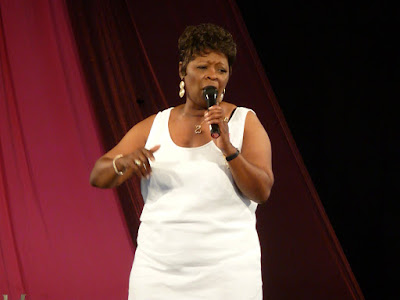 Today is Miss Irma Thomas' birthday. She is 79 years old and she will be performing again at this years Jazz Fest. And I will see her. And she will no doubt render me speechless, once again.

Listen to some Irma Thomas today.

Ms.Irma! The 2 sets she does at every Jazz Fest (Gispel and Acura stages) are not to be missed! She just finished recording a new album, so hopefully there will be some new music from her later this year.

Funny ... I've been catching up on HBO's Treme and so am in a NOLA state of mind. This morning looking at Spotify I saw your Irma playlist. Then saw this post.

I started to compose this message with "My favourite Irma Thomas song is _____" but after about a dozen edits / crossouts / rewrites / whatabouts / ... I'm just letting the music play.

For me it was "Ruler of my heart".

What a voice! And thank you for alerting me to the Roberta Flack album. I too had no idea about this record. What great takes on these songs! I can't stop listening to "Isn't It A Pity." All I can say is, what a voice!!

I've listened to this three times this week. Most of it was new to me, and I've been enjoying every minute.

I first heard Irma when the 'True Believer' album came out. Knocked me out. I quickly checked out her back catalog and was converted. When my then-fiancee (now wife) moved out of state for a year for her internship, she took TB with her and it became one of her all-time favorites. Since then, we've seen Irma perform dozens of times, including a memorable night at the Lions Den where she introduced us to Pinetop Perkins, who was having beer and red beans & rice at the bar.

A few years later, my wife was talking to Irma during a setbreak and requested to hear the song True Believer. Irma smiled and said that they hadn't performed that in years, but would try in the second set. She was 'true' to her word and called it out after the break. Her band quickly huddled to discuss it, and then nailed it. Irma pulled the lyrics up in her songbook and delivered a stunning, beautiful performance. I'm not sure I've ever seen my wife happier. Quite a night.

Happy birthday to the Soul Queen of New Orleans. I truly hope the whispers of a new album come to pass.

Fantastic singer! I first heard Irma on the jukebox in "Down By Law" singing "It's Raining". Unbelievable! I ordered a best of album the next day called "Break A Way", not a mediocre song on it. I've been a fan since then.