"A Walk In The Woods": THE WEEKEND MIX 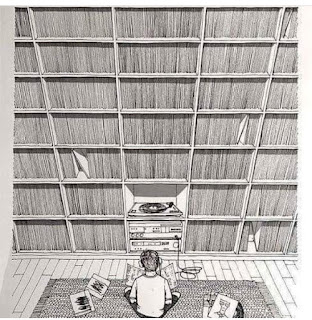 "Nice- My favorite kind of mix you do!"
-Our long time pal and loyal reader, A Walk In The Woods

Well, thanks AWITW! I enjoy those (not so) random mixes myself. Here's another one with your name on it, literally.

You can thank the iPod algorithm for the first half of this mix. I continue to be amazed by just how perfectly this little pod can sequence a stretch of songs, in this case, the Tom Waits through The Toms. I tacked on that Roxy track to open things up because many moons ago, when CD players were first being introduced and barebones players by Yamaha were selling for $600---I know, I bought one---I watched a demonstration that took place on the stage of Pier 84, right before a Todd Rundgren concert. The gentleman trying to sell the CD player played "Manifesto," and the sound of the drums almost through me back into the Hudson River. I was sold and I always think of "Manifesto" as a perfect opening song. Or a way to sell a stereo.

I am on the fence about this new Karen O. and Willie Nelson take on the Queen/Bowie hit. Let's see what you think.

That Riot Squad cover is one of a handful of recordings the band made while a young David Bowie was the singer.

And making the cut at the last minute is Lucinda Williams' incredible take on Tom Petty's "Room At The Top. Thanks RichD, it was just what the mix needed.

The rest? I hope you dig it. I do, 'cause it sounds good altogether.

Thanks Sal and thanks AWITW

Even when I think I'm just making a "random" mix I've come to realize that there is a "musical ouija board" driving the selections on a subconscious level.

* I dig the Karen O / Willie. I put it in a weekly mix yesterday. And I like what artists are doing locked in under the COVID.

* And the Lucinda is wonderful!

Thanks to all and have a great weekend.

Under Pressure -- did not work for me. I'm not saying that song should never be covered, but Willie did not do it for me.

Hilarious!! After not a great week (stress levels high on some days as a combo of unemployment since March, family health issues, parenting issues, election trepidation... sheesh!), it brought a smile to see a mix named for lil' ol me...

Downloading now and will comment once I get through another job interview this afternoon.

Also, I was on Lucinda Williams' live stream last night where she played Petty covers - anybody catch that? SO GOOD! And she played "Room At The Top" with a great story beforehand. Despite this li'l unemployment thing, I treated myself to all 6 of her upcoming livestream shows because I'm going into remission from no live music since the Raphael Saadiq show my wife and I saw in February. Must have live music to function.

Thanks again Sal - cheers from Atlanta!

Nice mix. Thanks for turning me on to that Chuck Prophet tune. Why I love this blog.

I wanna love the idea of the Willie/Karen O version. But It's just not grabbing me.

Love the Lucinda, though

All these years I thought The Toms output was one lp followed by an expanded version. I think Tommy Marolda has put out an incredible high percentage of great songs. And then to recently find out about all of his other releases. Just picked up Applestation which has a lot of a psychedelic/60's feel brought up to date to it. Very cool

Just listened and really enjoyed the mix... including my fave Dylan song of the last 25 years. (How did the iPod know) I realized it includes a set of lyrics he never repeated in any of the 55 or so times he's played it live:

When the last rays of daylight go down
Buddy, you're old no more
I can hear the church bells ringin' in the yard
I wonder who they're ringin' for?

Great choices... especially that version of "Waiting For My Man."

I told myself I would buy the compact disc player when it hit $300. And did. I also STOPPED buying cassettes (ugh, I know, but I loved the portability and NEEDED my albums in the car and walkman) about six months in advance of the CD player hitting $300. I had a library of maybe 20 CDs by the time I bought the player. And you know, my "stereo" was looking a little tired. Maybe I needed new speakers and more? My brother Chris said, hey, don't go nuts. Buy the CD player, then let's hook it up and see if it makes a difference. If so, then maybe you'll want to buy new speakers. Good advice! I bought the CD player, came home, we attached it to the crappy little stereo, I set the volume at strong but not CRAZY strong and played my cassette of "Born In The USA" opening title track. It boomed out, baby. Rocked the room. Naturally, I played the whole song. Then I put in the CD and hit play it was like that classic poster/TV ad. I was blown back onto my bed by the MONSTROUS SOUND emanating from the speakers. It was like the difference between a crappy little transistor radio and seeing the E Street Band in a football stadium from the sixth row center. I was OMGing long before OMG was a thing. My brother and I looked at each other with shock and awe and massive grins. And we headed right outside to go back to the department store so I could buy some new (BOSE!) speakers.

One more thing...no easy way to say this, I guess, but Under Pressure would work wonderfully with just Karen O.