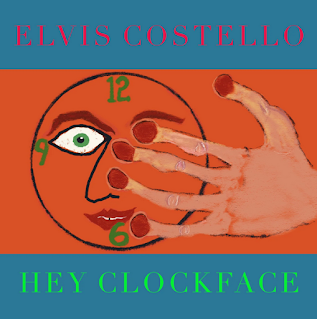 NO FLAG***
This was the first single. Liked it the first time. Haven't played it since. Still holds up. Crunchy and angry, like something off "Blood & Chocolate."

THEY'RE NOT LAUGHING AT ME NOW***1/2
A beauty, like a classic Elvis ballad. Would not be out of place on "King Of America" or even "Spike." Builds nicely. Voice sounds great.

NEWSPAPER PANE***
Building on a repetitive riff, something about the refrain feels late 60's, Buffalo Springfield, even a little psychedelic Grateful Dead comes to mind. Great vibe all around.

I DO (ZULA'S SONG)***1/2
Piano, brass and strings. Smoky like Sinatra on "Only The Lonely." Again, EC's voice is terrific. Lovely.

WE ARE ALL COWARDS NOW***
Kind of clanky, has a classic EC bridge, similar to "Pills & Soap." Good stuff.

HEY CLOCKFACE/HOW CAN YOU FACE ME?**1/2
40's or 50's dancehall? Clarinet gives it a New Orleans feel. Enjoying the restraint in the vocals. Fun change of pace.

THE WHIRLWIND****
Really stunning. Absolutely beautiful. Piano and brass. Costello's falsetto is wonderful, as are the harmonies.  My favorite track, so far.

HETTY O'HARA CONFIDENTIAL**
I think this was the second preview track. Didn't dig it when I heard it then. Very much like "Hurry Down Doomsday," which I never cared for. Weakest track, so far.

THE LAST CONFESSION OF VIVIAN WHIP**1/2
Piano, strings, brass, woodwinds, all very understated.  Has the same feel as "North," but here EC is not oversinging. A good thing. Pretty.

WHAT IS IT THAT I NEED THAT I DON'T ALREADY HAVE***
Very Jacques Brel. I'm really loving ECs vocals on this whole record. He's serving the arrangements instead of trying to top them. Very nice.

RADIO IS EVERYTHING**
More spoken word, this one over ambient music very similar to Eno on "Another Green World" or "Music For Films" for the first half, closing with something closer to Tom Waits.  I don't mind it, though I hope this doesn't become a habit.

I CAN'T SAY HER NAME**
Another nod to the classics. Cole Porter, Gershwin. Has a "Makin' Whoopee" feel. It's fine, but maybe one too many at this point.

BYLINE***1/2
Another beauty. Could be another from the Bacharach sessions. Really gorgeous and a fine, fine way to close things out.

If you are the Elvis Costello fan who gave up at "Almost Blue," I can't imagine this record is for you. On the other hand, if you've embraced the changes, the brilliant acoustic country and blues of "King Of America," the sweeping pop and balladry of "Painted From Memory," the funk textures of "Wise Up Ghost," the love letter to New Orleans with Allen Toussaint "The River In Reverse" and the most recent change of pace, "Look Now," one of the best of EC's career, then get ready for "Hey Clockface," because on first pass, this is a winner.

Considering the circumstances of its creation--isolation, quarantine, three cities with two different sets of musicians--this is remarkably cohesive. Costello's singing never gets over the music, and while that may be offputting to those who want to hear "Oliver's Army," the songs on "Hey Clockface" are as melodic and heartfelt as anything in his career.

This was one pass. Things may change, for better or worse. But what a first pass!  Great record!

"Look Now" was a wonderful record and got me back on the bandwagon after a number of outings that just didn't do it for me. The stuff that's been released so far is full of the energy he displayed early on in his career and they have really interesting and quirky arrangements which appealed to me more than maybe the actual songs did. Really looking forward to this one.

Like to see these quick take reviews, Sal. I'm looking forward to the mailman delivering my CD tomorrow. I was worried about how the whole album was going to hang together, based on the tracks that have been released so far.

I put on Look Now last week because a few of the songs were playing in the jukebox in my mind. The album still holds up for me, and agree that it's one of his better albums.

With the super-duper edition of Armed Forces coming out in a couple of weeks, everything's coming up Elvis!

Nice review! I'll have to check it out.

I couldn't wait for the vinyl do I listened to the downloads. This is a first impression only, based on a single listen. I like a lot of it. I think I'm in agreement with you that "Whirlwind" is my favorite. However, it didn't seem to gel as an album. It's kind of schizophrenic. There was the Helsinki stuff, which didn't seem to mesh with the Paris or New York cuts. On their own, they sounded good but some of the transitions were rather 'huh?- inspiring. I do like albums with a variety but for some reason, a lot of it seemed to not belong together. Did you feel any of that?

@cmealha
I hear what you're saying, but it didn't bother me. I think "Look Now" tends to jump around genre wise. Maybe you just like the songs better on "Look Now."

Just have to live with it for a bit, I guess. But I agree with you that he is in fine voice throughout.

The songs are good, but they all seem to be leftovers of other albums. Have been enjoying it, but I keep thinking it sounds a bit recycled.

"Look Now" left me tepid; I guess I'm just not into "uptown pop". My copy of Clockface finally arrived, and I prefer it. A couple of clunkers, but balanced by some beautiful tunes. Review up soon.

WTF is “uptown pop?”
I read your Bruce review. You just seem angry. Why bother?

"Uptown pop" is how he described the sound of the album.

Why bother? The blog is what I do. If I only reviewed the good albums there wouldn't be any perspective.

Wardo,
No no. I don't mean you should only write positive reviews. Your review begins, "as threatened." If you're going into it with snark and cynicism, why bother? Your Bruce reviews seem to indicate you are somewhat of a fan. If so, why the attitude about an E Street record?

As for "Ghosts," is is possible the musical references and quotes from "The Walls Came Down" were intentional? Michael Been left us in 2010. Could this be Bruce's tribute?

"Threatened" could be softened a bit, sure.

I didn't appreciate Springsteen to any extent until after Tunnel Of Love. I grew up in the tri-state area, so via WNEW-FM (102.7 FM, where rock lives) I was immersed in Springsteen well before Born In The USA, after which he was inescapable. Add the constant fawning from Rolling Stone magazine, and my cynicism was fueled. Once I started listening to the songs that weren't the constant radio staples, I began to appreciate him more. (Maturity helped.)

I still take any automatic 4- or 5-star review from Rolling Stone with a can of salt, and countless "this is just what the country needs right now" reviews of LTH became a dare to disagree. It's a good album, but it's not a great album, and it's not a masterpiece. And I still say he should have released it in May when everybody was happy to be outside after being shut in for two months.

As for the Call reference, were it really a tribute he could have shared the publishing or stated "inspired by".

Wardo,
Okay. But I'll say this, this stuff:

"the constant fawning from Rolling Stone magazine"
"this is just what the country needs right now" reviews of LTH became a dare to disagree.
"he should have released it in May when everybody was happy to be outside after being shut in for two months"

None of it should cloud the music within. I guess my feeling about your review seems more valid now. You had a different agenda.

As for quoting The Call, it's a lot more powerful just doing it. At least I think so.

I didn't know I had an agenda. I have updated reviews from time to time, increasing ratings, even decreasing ratings, and changing tone when my feeling about an album changes. Who knows? This could be a grower.

I mentioned "agenda" because you said things like "constant fawning of RS," and "a dare to disagree" and "he should have released it in May." Seems like an agenda.
Anyway...