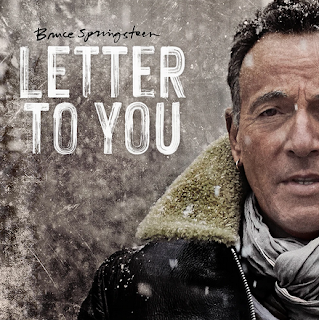 ONE MINUTE YOU'RE HERE**1/2
Quiet start, like a "Western Stars" outtake, solid. "Freight train" plowing through, one minute you're here, next you're gone. Sounds like March 11th.

LETTER TO YOU***1/2
I know this first single didn't overwhelm too many, but I still think it's great. Classic ESB.

JANEY NEEDS A SHOOTER***
No resemblance to the Zevon track. Feels like a "Hearts Of Stone" groove, not as heartbreaking. Also not as good. Terrific opening organ, a nice nod to Danny. Man, the ESB can really sound like the ESB when they want to. Bruce losing it a la "Drive All Night" on the coda. Nice touch. Just went from 2 1/2 to 3 stars because of that!

THE POWER OF PRAYER***
Same vibe as "I'll Work For Your Love." Sweet melody, melancholy. Love the whole sound, especially after the breakdown. Very nice.

HOUSE OF A THOUSAND GUITARS*1/2
Not the Willie Nile tune. Opening piano intro a bit like "Theme From Arthur." Not much happening here. Least favorite so far.

RAINMAKER***1/2
Love this. Melody and delivery calls to mind a number of songs from "The Rising." Big chorus. Just great.

IF I WAS THE PRIEST***1/2
I can hear The Band and Levon singing the hell out of this. Initially disappointed to find out Bruce was revisiting this, but it's damn good. Arrangement similar to full band "Atlantic City." Bruce vocals on whole record sounding really damn strong. And a guitar solo to take us out! Another favorite.

GHOSTS****
It killed me the first five times I heard it and I believe it will kill me the next hundred times. Stone cold Bruce/ESB classic.

SONG FOR ORPHANS**
Bruce channeling Dylan. Another oldie given a new life. Not terrible. The feel's a bit dirgey. Def a "Greetings..." vibe, only more produced.

I'LL SEE YOU IN MY DREAMS***
Nice way to close things out. Short and sweet, right out of "The River" playbook. The guitar and organ solos will take you right back to 1978. Nice "Jole Blon" quote on the guitar at the end. Great.

For me, this record is exactly what I needed at exactly the right time. Yes, it was just one pass. I wasn't focusing on lyrics, references vague or blatant, or the overall autobiographical narrative. Things will change. They always do. But that's what makes a record great, its ability to keep you on your toes. Lyrics will hit me as I continue to live with this record, as will certain musical moments that I might have missed first time through. Right now, it was all about the sound, the melody and production, all of which made me very happy. I'd trim a little fat and get "Letter To You" down to 40 minutes. Then you'd have something that maybe even the cynics would have trouble criticizing.

I agree with everything you wrote, Sal. I'm so happy with the sound and overall production that I'm practically giddy. This is, at first listen, the strongest overall set of songs on a Bruce album in a long time and to have it sound like the most E Street album since Darkness or The River is an absolute gift in 2020.

I think I probably like Song for Orphans better than you, and agree that (so far) House of a Thousand Guitars is the only weak-ish track. It's a shame that a song with that title didn't rock hard enough to shake my speakers. And If I Was the Priest is, in my first listen, the stunner of the album.

I look forward to living with this record for quite some time. Oh, happy day!!

thanks, I am listening now. was typing so didn't know what tune was on so Shazamed on my phone and Burnin' Train got me "Utopia Planitia by Hermanuskoning" try it*

Great review. Like he keeps doing over and over, he delivers what we need even if we can't articulate what our needs are. The older songs may be retreads, but the they sound great with the ESB. I wonder of Trump like Rainmaker?


Sal,
I love what I am hearing so far. Aside from Working on a Dream (and it isn't awful) I have found things to love on each record since the "good old days". Some more than others. Magic is especially good to my ears. My biggest Bruce complaint after 40+ years is that he needs an editor in the CD age. Trim those 50-60 mince albums down to 40-45 and each and every one moves from good to very good/great. No matter what I am looking forward to next Friday to brighten my 2020.

I so can't wait for this. Obviously.

OldRockr1 = your comment about Bruce needing an editor to trim down the minutes on his recent albums can be applied to just about any artist. I agree; 40-50 minutes is just fine for an album.

That being said, I cannot wait until next weekend to hear this record. Right now, I'm jealous of the folks on this board who've been able to hear it!

when a record gets me so hard it brings tears, it's a blessing...I certainly didn't expect this from BS and the band...
I guess I'm not too old and jaded to be surprised...
one thing I'd like to mention...the coda on "Ghosts"...it's the ending of The Call's "When The Walls Came Down" note for note...what a sweet tribute to Michael Been and the Call...one of my favorite bands, by the way...it's a moment that makes me appreciate BS and this record...

good call on the previous Call reference. Every time I listen to ghosts i get chills and that's a good thing.