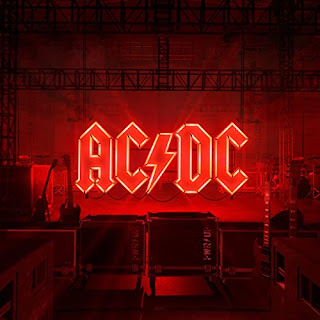 THROUGH THE MISTS OF TIME***
Sounds like AC/DC. This is their pop hit. Hooky melody. Brian is singing and not screaming. (Well, singing for Brian.) I dig it. Good track. Another solid Angus solo.

KICK YOU WHEN YOU'RE DOWN**
Sounds like AC/DC. Five mid-tempo numbers in a row. Missing the Bon Scott years and tracks like "Problem Child" and "Beating Around The Bush" and "Whole Lotta Rosie" when the band would explode. There's still time, but still...five in a row. This one is weak.

WITCH'S SPELL*1/2
Sounds like AC/DC. "Thunderstruck" meets "You Shook Me All Night Long" and not as good as either. More drunken footballer vocals. Meh. Weakest, so far.

DEMON FIRE***1/2
Sounds like AC/DC. Alright! Picking up the pace. Early AC/DC meets ZZ Top. Something about the riff feels like a twisted version of Petty's "Running Down A Dream." Great track.

WILD REPUTATION*1/2
Sounds like AC/DC. Third rate "Back In Black." Not a great one.

SYSTEMS DOWN***1/2
Sounds like AC/DC. It's amazing what Angus Young can do with two chords. Love this riff and this track. And one of my favorite tricks--let the bass drop out for just the guitar and drums on the riff and then come back big. One of my faves on the record.

MONEY SHOT**
Sounds like AC/DC. Similar feel to "What Do You Do For Money." Nothing really.

Full disclosure, I've been on an AC/DC kick for the last week, revisiting those great Bon Scott records. (Hey, even Lucinda Williams loves the "High Voltage" album!)  I was looking forward to "PWR/UP," though I'm not really a fan of the Brian Johnson years.

It's interesting, the Bon Scott lineup made seven records in five years, all of which are fantastic. Some of my favorite rock records of all time! The Brian Johnson lineup has been together forty years and only released ten records, and more than half are mediocre. They returned strong after Bon Scott's death with the now legendary "Back In Black," but nothing else ever came close.

"PWR/UP" is a fine return after the six year layoff, the death of Malcolm Young, Brian Johnson's temporary sacking and replacement with Axl Rose due to hearing issues, and drummer Phil Rudd's home detention after being charged with "attempting to procure a murder!" "PWR/UP" was a fun listen and it just might get a few more spins.

I'm looking forward to hearing this record when it comes out. That being said Sal, I think yo probably nailed it; a few really good songs surrounded by mediocrity similar to every release since For Those About to Rock. But after all this band has been through the past few years, I'm just happy to have them back.

These suggestions are 😍😍😍 دانلود آهنگ جدید

First, it was a needed relief to have your blog not cover politics today. Not because I don't want to think about it, and not because I am not hoping fervently to have a new president declared soon, but because I just spent 15 hours as a Poll Worker for the first time, and I need a mental break.

Second, hilarious review. That would be a great name for a cover record honoring them - "Sounds Like AC/DC"

Very accurate review! I gave it one listen, nothing really stands out.

Sal, couldn't agree with you more re Brian Johnson. Always seemed a bit too much of a screamer for my liking and lyrically he just didn't have Bon's wit or turn of phrase.
I'm probably one of the few people I know who didn't really care for Back In Black..credit given where credits due...the title track is an absolute belter but sadly that was it for me.

Bon had an odd voice in his own right, but even under that weird tone and growl, he was perfect for the music. You are right on regarding his wit and turn of phrase. Back In Black has its moments, for sure. But I don't think I have gotten over that initial shock forty years ago. "Hell's Bells" has such a killer opening riff and then BLEEYEEAAGGH! As soon as Brian comes in, you know it's a whole new (not so good) ball game.