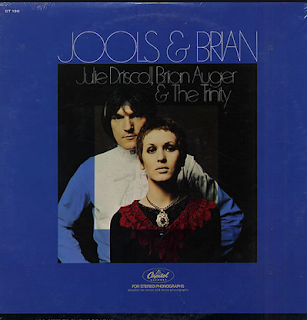 If you have ever attended a record fair of any kind, you will have come across a copy of "Jools & Brian," the 1968 release from Julie Driscoll, Brian Auger & The Trinity. It's usually in a few dealers' boxes, priced somewhere between $4 and $10. As a record dealer, it's one of those records that looks cool, but once you are over the initial thrill of seeing it in a collection, you realize it's a hard sell and you will be dragging it to a few more shows, each time lowering the price by a buck or two.

The trick with this record is...YOU HAVE TO PLAY IT!

I randomly pulled this one out last night and it sounded better than ever. When Brian Auger takes over the proceedings, it sounds like a heavy metal, British Booker T. & The MGs. When Julie Driscoll takes over, it's more like Dusty Springfield being shot out of a cannon. Really, you can't lose.

There are so many great records out there sitting in boxes and bins, that never get bought or played because everyone is looking for the same gems- an unpeeled VU & Nico banana cover, a Led Zep 2 Ludwig "hot mix," a mono Pink Floyd "Piper At The Gates Of Dawn," etc. Sometimes, you've got to make good with what you've got and often, you'll be rewarded.

Next time you are out record shopping, don't sleep on this $5 "Jools & Brian" record. It'll be the best $5 you'll spend that day.

seconded. I have their last album together, "Streetnoise." as one of my all-time favorites, a double album that went as far as they could go. ballads, jimmy smith workouts, avant composition, and a slew of reimagined cover versions with Driscoll channeling Nina Simone a lot if the time. I think I became aware of Auger and Driscoll when they guested on a Monkees tv special.

These songs brought back childhood memories of a feeling, more than an event. I would definitely pay more than $5.00 for this record!

I have Streetnoise, too, and it is a fascinating slice of London jazz-rock fusion. But it is not "their last album together". That was Encore in 1978, when they reunited (as Brian Auger and Julie Tippets) for another great set of mostly covers, including an excellent Please Don't Let Me Be Misunderstood, Jack Bruce's Rope Ladder To The Moon, and Steve Winwood's No Time To Lose, and two fine Al Jarreau covers, Spirit and Lock All The Gates. Julie Driscoll Tippets has one of the more interesting and different approaches to her vocal styling, and she is anything but timid. And of course Auger's Hammond B3 is the bomb. Another great find in the used LP bins!

Aah yes. I fell in love with Julie when she guested on the Sandie Shaw Show, about a 100 years ago. Sandie was considered pretty cool at the time; mini skirts and bare feet! Then Jools came on, all in black, looking scary and sexy and bewitching ... then she sang ... wow, and Sandy became invisible and irrelevant.
All the Jools/Auger albums (there weren't many) are worthwhile. Thanks, Sal for the reminder. Maybe an idea that could be explored further; Bargain Bin Neglected Treasures?

Amen brother! Love's me some Julie/Brian. Streetnoise one of my all time favorites.