"The bugger in the short sleeves fucked my wife, did it quick and split"-John Cale, "Guts"

Apparently a reference to Cale catching Kevin Ayers with his wife on May 31, 1974, the night
before "June 1, 1974" was recorded on which they shared a bill, and sat for Mick Rock to take the album's cover photo minutes before the show. Awkward ya think? 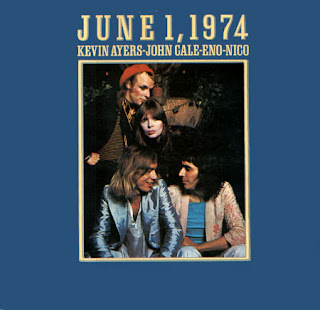 I wrote Sal with this bit of trivia, which he hadn't heard, and expressed my enjoyment of his Cale mix.
It's been awhile since I've put one together. I've been busy in my home studio, working on my next "album", and haven't listened to much of anything, only occasionally commenting here at Burning Wood.
"I might have to make a Kevin Ayers mix to answer John Cale's", I wrote.
"That'd be great", he replied. 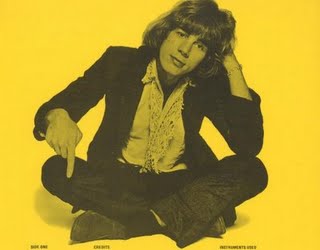 The British rock journalist Nick Kent wrote:
"Kevin Ayers and Syd Barrett were the most important people in British Pop Music. Everything that came after, came from them."

A rather large claim I'm not sure is inaccurate. Being a fan of psychedelia, Pink Floyd, Bowie, Glam, and Art Rock in general, I became aware of Kevin through Soft Machine, Robert Wyatt, Daevid Alan, Gong, and of course Brian Eno, due to the aforementioned "June 1, 1974". A friend gave me a cassette dub, and without the album for reference, I couldn't really tell where John Cale ended and Ayers began. I assumed the opener on side 2, "May I", was John Cale.

Because Eno, Phil Manzanera, and Richard Thompson (!) appeared on Cale's "Fear", I bought it, and was a little disappointed when "May I" never turned up on any of his other albums.
A few tears later, in the early '80's I discovered it on Kevin's "Odd Ditties", a collection of singles and B sides, found at Tower Records on Sunset Blvd, in Hollywood. His albums were largely out of print, by that time, and not easy to find, sparking an obsession.
For years, when I went into a record store I'd check the "A" section, for Kevin, "H" for Roy Harper, and "P" for Lee "Scratch" Perry as a quick indicator of their inventory. 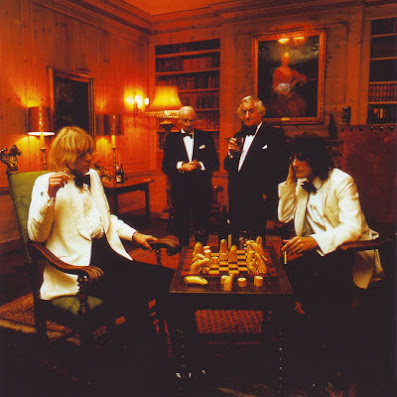 Born in Kent, England in 1944, he spent his youth in Malaya as his stepfather was a civil servant stationed there. Returning to London at 12, a subsequent drug bust exiled him to Canterbury, where with Robert Wyatt, and Hugh Hopper formed the Wilde Flowers and The Soft Machine. After an exhausting tour with Jimi Hendrix in 1968, he sold his white Fender Jazz Bass to Noel Redding and retreated to the beaches of Ibiza, Spain, with Daevid Allen, of Gong, to recuperate. A songwriting binge led to his first album, "Joy Of A Toy".
Kevin Ayers sang in an easy baritone, and his music is a uniquely British mixture of whimsical psychedelic folk rock. This compilation covers roughly the same era as Sal's John Cale collection, with most of the material recorded between 1968-1976. Guest contributors and alumni include Mike Oldfield, Steve Hillage, Andy Summers, Mike Ratledge, Ollie Halsall, David Bedford, Robert Wyatt, Lol Coxhil, Daevid Allen, Nico, Eno, and even Syd Barrett, who may or may not have played guitar on "Singing A Song In The Morning". While Kevin claimed he played the solo in imitation of Syd, an early version, titled "Religious Experience", definitely includes Barrett (in his only session work outside of  Pink Floyd or his solo albums), and it sure sounds like him here. If that solo isn't Syd, no one has ever captured his style quite like Kevin did.
According to Wikipedia, "The late 1970's and 1980's saw Ayers as a self-imposed exile in warmer climes, a fugitive from changing musical fashions, and a hostage to chemical addictions."
He did however return to form with his final release, 2007's "The Unfairground", a worthy companion to his classic albums and bookend to a unique career. With contributions from old friends Robert Wyatt, Phil Manzanera, Hugh Hopper, Bridgette St. John, and joined by members of Teenage Fanclub, The Go-Betweens, and the Trashcan Sinatras, it was critically well received. The title track nearly made it to this mix.
Kevin Ayers died in his sleep, 18 February, 2013 in Montolieu, France, aged 68. 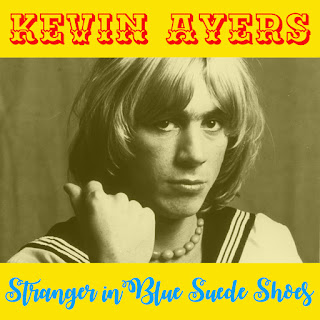 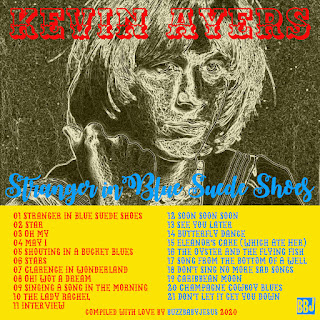 DJ John Peel wrote in his autobiography that "Kevin Ayers talent is so acute you could perform major eye surgery with it".

Have a safe and sane weekend, everyone!

Posted by buzzbabyjesus at 5:03 AM

Thanks for the biography and mix, BuzzBabyJesus. I, too, first heard Kevin Ayers via 1 June 1974, but never went much further, while I did with Eno, Cale, and Nico and many of Ayers' collaborators. Happy to have a curated set from a fan as an entry point into his work.

What an awesome comp. Can never get enough Kevin Ayers. My entry point was also 1 June 1974.

What a great window on an artist I don't know very well.

Stranger In Blue Suede Shoes is an absolute belter of a track...I'm partial to a bit of Kevin Ayers but I really have to be in the right mood, otherwise he can come across as a bit of a smug middle class English git (in the nicest possible way)

England just has more solo artists that have long and interesting careers that I remain interested in. And certainly Cale, Barrett, Roy Wood and Ayers were some of the first. It continues through Eno, Thompson, Hitchcock, Partridge, Weller and many more.