"A Bunch Of Songs": The Weekend Mix 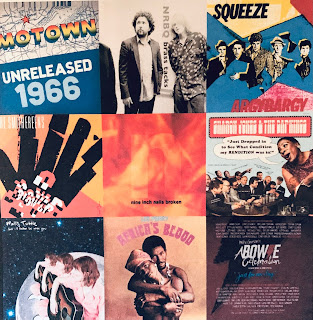 I have a folder where I toss random tunes. These are songs I read about, hear about or simply enjoyed at one time and hoped to revisit at another, like say... in a blog post. Today I chose an hour's worth.  It looked like a good mix and so here it is.

Lee Perry's "Africa's Blood" is getting a reissue next week. I was unfamiliar with this record and did some digging. This All Music review got me- "the personality of Perry shines through and gives each track that Upsetter twist that keeps this stuff from being relegated to footnote status. A perfect example of this is the cover of "My Girl" here. Sure, it's the same song, but it also bears the unmistakable stamp of Perry, turning a cover of a song you've heard too often into a foot-tapping good time. Heartily recommended."

Of all the Phil Spector songs, it was this Ronettes track that came to mind when I first heard about his death. I can't explain why, but it did and so it is here.

I've been wanting to post this Peter Wolf song as a Song Of The Day forever, but there is no YouTube video of the studio track. So it is here. I could listen to that coda on a loop.

I avoided Joe Jackson's "The Duke " for years, assuming I wouldn't dig it. Steve Vai playing "Isfahan?" Iggy Pop and Sharon Jones? I'm no purist, but I do love Duke Ellington and back in the 90's I spent a whole year or more going through the Penguin Jazz Guide and listening to as much of The Duke's catalogue I could get my hands on. On paper, JJ's "The Duke" looked awful. Boy, was I wrong!  I finally gave in as part of the recent JJ binge. Wow! What a terrific record! It all works, including Vai, Pop and Jones.

And speaking of Sharon Jones, I love her cover of the early Gladys Knight single. It might be better than the original.

And speaking of Gladys, this one stayed in the vault until just a little while ago.

Been thinking about the original "Ice Cream Man" since Eddie Van Halen passed.

I featured Molly Tuttle's Rancid cover a couple of days ago, but I think "Today's Cover Version" gets lost in the shuffle, so here it is again.

"No More Tearstained Make-Up" came to me first when Elvis Costello covered it in the 80's. It is one of my Top 10 Motown songs. As a matter of fact, I had started writing a piece on the album "Watchout," a solid Motown album from start to finish, but have been too distracted lately and never completed it. Anyway, the song is here and I highly recommend Martha & The Vandellas' "Watchout." It is also a Top 10 Motown album.

There are some other goodies here as well, including a beautiful reading of Bowie's "Strangers When We Meet" from the live Bowie celebration a week or so ago, and NIN's Adam Ant cover, which I absolutely love. That Squeeze track might be my favorite of their b-sides and while I'm not a big Smithereens fan, I do think Smithereens "11" is a perfect album and this song from their follow-up is pretty great, too.

Anyway, dig in and give them all a chance.

TRACKLIST
Maybe I Loved You- The Jay Vons
I Can't Take You Back- Gladys Knight & the Pips
Ice Cream Man- John Brim
My Girl- The Upsetters
Giving Up- Sharon Jones & The Dap-Kings
I Wish I Never Saw The Sunshine- The Ronettes
What The Butler Saw- Squeeze
Now & Then- The Smithereens
Olympia, WA- Molly Tuttle
Perdido/Satin Doll- Joe Jackson
I'm Not Here- NRBQ
Physical (You're So)- Nine Inch Nails
No More Tearstained Make Up- Martha & The Vandellas
Strangers When We Meet- Gail Ann Dorsey
I Don't Wanna Know- Peter Wolf

I just finished listening to the Sharon Jones cover album and was not familiar with the Gladys Knight song so I listened to the original once I tracked it down. No comparison. Sharon's is a better version.

Great mix (as usual). Thanks so much. Peter Wolf has somewhat quietly had one of the all time great solo careers after departing a classic band.

Meanwhile, being from Atlanta, I am just torn up tonite about my hero Hank Aaron's passing. I only have a handful of true idol/heroes amongst people living in my lifetime...

(Just noticed, 3 of them are strongly associated with my home city or state of Georgia!)

I see you noticed his passing. I mean - Hank was and is the all time home run champ in my eyes. He did it all with raw talent, work, and longevity.

Sal, a really classic mix! You have such a wonderful eclectic taste for cool music.

That's a pretty brill mix there, Mr N, which is tickling my lugs as I type (Martha & The Vandellas to be precise). Many thanks & hope you have a super weekend. Cheers!