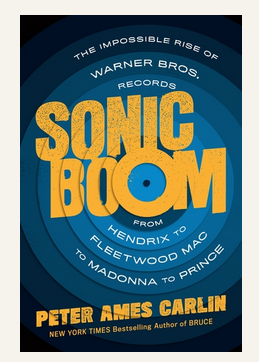 Peter Ames Carlin wrote one of my favorite rock bios of all time. His 2012 New York Times bestseller "Bruce," told the story of Bruce Springsteen the way I like reading a rock and roll story. It spared the 60 pages on the history of Colts Neck, New Jersey and another 40 pages on his great-grandparents' parents and got to the heart of what makes a great rock book--the subject and his music, with just the right amount of historical pepper. Peter Ames Carlin knew what a Bruce fan wanted to read.

This is why I was looking forward to "Sonic Boom: The Impossible Rise Of Warner Brothers Records." Carlin, who has contributed a number of times to Burning Wood, loves music the way we love music and I was confident this story would not be bogged down with numbers, charts and statistics. It would be something I'd want to read. Stories worth telling.

I was not wrong.

"Sonic Boom" reads like a series of shorts, each covering a pivotal moment from WB's beginning and its failure to release a hit, right on through its rise in the early 70's. But this isn't filled with the stories you've heard time and again. These are inside stories from the very top of the heap, Mo Ostin, and his staff of music-loving crazies and visionaries, who share anecdotes about Van Dyke Parks, Randy Newman, Frank Sinatra, The Kinks, Alice Cooper, Lowell George and The Grateful Dead. 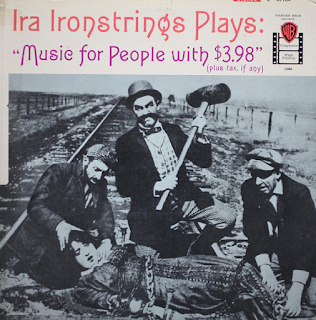 Long before Fleetwood Mac's "Rumours" and "Purple Rain" there was Ira Ironstrings and that 1958 classic "Music For People With $3.98 (Plus tax, if any)." It took a number of these mistakes before WB had a hit record..and it wasn't with music. Even when Frank Sinatra, a man who famously hated rock and roll, was given Reprise Records, he signed his pals Frank and Dean of course, but also Ethel Merman and Dennis Day. 1962's "hit" list included, among other misses, "The X-15 And Other Sounds Of Missiles, Rockets and Jets." The rise took some time and some truly forward thinking and you'll read about how it all unfolded, with The Kinks, Trini Lopez, chimps on tricycles and one of the GTOs jumping out of a cake.

"Sonic Boom" is fast and funny, and it does what the best music books should do--it makes you want to listen along. My soundtrack to "Sonic Boom" included revisiting Van Dyke Parks' "Song Cycle," which is now something I love after dismissing it for years, Little Feat's "Feats Don't Fail Me Now," Alice Cooper's "Love It To Death,"and The Dead's "Anthem Of The Sun." I'm sure each of you will have your own personal picks as you read along.

I rarely write about books I've read, but I had so much fun with "Sonic Boom," I thought you might want some of that fun, as well.

"Sonic Boom" is out tomorrow and you can get it here.

I'd forgotten/haven't thought about how WBs was such a cool label for a while. With Randy Newman and early Van Morrison they seemed to have the touch and taste.
Thanks for drawing attention to this, I doubt I would have found it otherwise.
Yet another reason to justify my daily visit.

As soon as I saw the post, I thought, "BBJ will weigh in, if Sal doesn't, about them good ol' WB Loss Leaders". I've still got one, complete with glossy insert: 'Supergroups' from 1976, which has no title anywhere on it (the cartoon representation of your Mr. Rundgren on the cover looks like Jim Dandy Mangrum to me, but I digress...The glossy insert, listing all of the Loss Leaders releases to-date, is how I found out the title of the one I've got). As to 'Love it To Death', AC's original band is never far from the ol' CD player, as that band was my first musical love back when I was a littl'un.
C in California

Definitely looking forward to reading this one. Thanks Sal!

Stan Cornyn's book is tremendous as well. The down side is that the higher up the corporate ladder Stan goes, the more boring the book gets.

Tab Hunter tells a story that the label was created because Jack Warner was upset that he (being under contract with Warner) had a hit record with Dot Records (Young Love).

I grew up in culturally stilted Butte Montana, where Frankie Yankovic was the order of the day. National Lampoon clued me into the Warner's collections of songs on a series of LPs like The Big Ball, Schlagers, and Loony Tunes & Merry Melodies. Great compilations of the greatest music you'd otherwise never hear. It gave me my first toehold onto Fleetwood Mac, Zappa, Little Feat, Captain Beefheart, Ry Cooder, on and on. I now live with a wall of vinyl, and a ton of it is WB. Good heavens, just the Van Morrison. Those samplers were like 4 sides for $2.00. Changed my world. Thanks for reminding me!

Just finished this wildly entertaining book, thanks to your suggestion.

I believe Ry Cooder's first album was my first WB record, Bought in an appliance store in 1969, next to the washing machines and refrigerators, as there was no record store in my little town. Knowing nothing about Ry's music, the cover was so evocative that I was willing to cough up 3 dollars(!). Probably the best 3 bucks I ever spent.

Later I discovered the cut-out bins at the dept store in the nearby city. Ironically, 'Absolutely Free' by the Mothers of Invention, cost me a buck. But that's another story...