"Todd Is Prod(ucer)": THE WEEKEND MIX 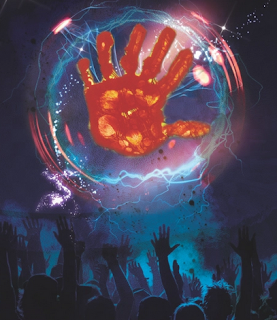 Opening on Sunday, February 14th with a finale on Monday, March 22nd, the Clearly Human Virtual Tour featuring Todd Rundgren and his big R&B revue was nothing short of a miracle. The band performed each show from the same theatre in Chicago, to a masked audience of less than 50, while broadcasting out to the various cities they would have visited on a tour, pre-pandemic. It was a major gamble and a colossal undertaking that had stunning visuals, high definition audio and miraculously few hiccups.

I planned on "attending" one show because I felt like I should. I had tickets for four shows where he would have been performing "A Wizard/A True Star" in its entirety. But when the news went from bad to worse to worser, it was all cancelled and I couldn't imagine that sitting in front of a computer monitor would be a valid consolation prize. I was wrong. After my mind had been blown by both the set list and the performance of the "NYC" show, it was a no-brainer. I wanted more and so I "attended" two additional shows.

These performances from the comfort of home could never replace the thrill of an in-person live performance, the pre-show cocktails at my favorite watering hole, the communal joy, the smell of the weed, the roar of the crowd. (Though oddly enough, I still couldn't get a cab when the shows were over.) But I could never have imagined that this virtual tour would even be close to the first class experience it was. I'll say it again, mind blown.

Over the course of these last few weeks, I was gifted with over a dozen audio captures from an incredibly generous, private Rundgren group I belong to. Needless to say, by closing night, I was all Todded out and needed a good old fashioned Motorhead palate cleanser.

But then a friend sent me a link to a ninety minute BBC program from 2010, that I somehow missed. It was devoted to Todd as a producer and featured in depth interviews with both Mael brothers of Sparks, Andy Partridge, John Siegler, as well as the man himself. I highly recommend the BBC show, as it included some tidbits that were new, even to an old Utopian like me. You can listen to it here.

Todded out? Not by a long shot. This program was superb and it gave me a kick in the ass to create this mix highlighting Rundgren as producer. Some songs are more obvious than others, and a few really obvious tracks have been left off.

It is what it is.

Hope ya dig it.

thanks Sal as ever.
have a good weekend.
Shane

Even though it was virtual, I hope you were still able to enjoy a pre-show cocktail, smell some weed and enjoy the (TV speaker) roar of the crowd.

Ahhhhh... thanks for this!

Highly recommend the interview Sal mentions. It's an enormously interest 1 1/2 hours that was just too short.

Thanks for the mix, Sal. The interview whetted my appetite.

Wait, wait... I replied on the run earlier, thinking this was mostly a post about Todd's role as a producer. That's cool. That's great and I dig it.

But you're saying he just did a virtual tour, all from Chi-town, based on "Nearly Human"? Crap! That may be my favorite album of his... well, it can't be, because "Something/Anything" is my favorite LP by anybody. But you see what I mean.

I'm sorry I missed this! Dang.

If I read correctly, it sounds like you were gifted some audio captures from it... if I read that right, and if you can share, well, that would be quite cool too.

In the meantime, back to the mix at hand, which looks great.

Awesome comp with the usual awesome insights. And thanks for omitting the obvious. Great call.

A Wakk In The Woods,
As I mentioned in the chat box, I can't post the Todd audio, but I am happy to share with anyone via email.
Leave a comment on any post with your email. I won't publish and we'll take it from there.

Sal, what's up with the six fingers?

Frito,
The virtual tour was based on Todd's 1990 tour behind the album "Narly Human," which had an album cover featuring that hand.