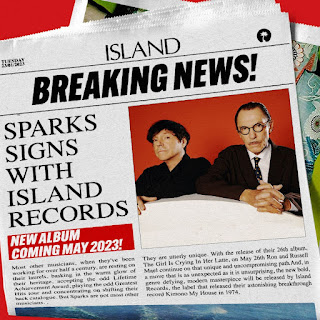 “Funny how things work! One of the most memorable periods for Sparks, the one that forever cemented our relationship with the UK and also exposed Sparks to a bigger audience around the world, was the '70s Island Records era. Chris Blackwell, Muff Winwood, and Co. went all in on our album, Kimono My House, and released a truly non-conventional first single, This Town Ain't Big Enough For Both Of Us.

Their belief (and ours) proved right:  that there was a place for both bold creativity and commerciality in pop music. And here we find ourselves in 2023, almost 50 years later, re-signing with Island Records, again with an album that we all feel is as bold and uncompromising as anything we did back then, or for that matter, anytime throughout our career. We're happy that after so much time, we've reconnected with Island, sharing the same spirit of adventure that we all had way back when, but with our new album, 'The Girl Is Crying In Her Latte'.”  Ron and Russell Mael

To coincide with the album release Sparks will take to the road for a world tour that will include 2 sold out headline shows at London’s Royal Albert Hall and, in America, the soon-to-be-announced largest headline show of the band’s career.. WATCH THIS SPACE!

Something to look forward to.

I have to confess —

I love their attitude, but I’ve always kind of dug the idea of Sparks more than the actual band.

That Sparks' album for Island was a big deal at the time. Going to England and just stomping on Brit Glam scene. This album kicked ass and had a big sound. Thank god for those record stores that turned you on to bands that you never would have heard of otherwise. And the rags that pushed great music also. It was a great time to be a music fan. It really is amazing they are a band still existing. Has there been a biography or any documentation of their history? It truly is amazing.

The Sparks Brothers is a 2021 documentary about the band. It's on Netflix and available to rent online via Apple, Amazon et al.

Great news - amazing musicians/songwriters... Thank you for sharing this news!

Except for the truly monster Kimono My House, a tad overrated but an A for effort ….but who am I to talk🤷🏻‍♂️
AL