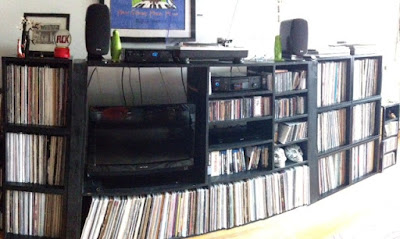 I wish I had some clever premise behind this weekend's mix. I don't. In the end, it was all about some songs I wanted hear. I will share this, though. I've been obsessing all week over Tom Petty's pronunciation of the word "possess" in the song "Scare Easy." That's something. OH...and I will be seeing Richard Thompson's Electric Trio this evening, touring behind his just released new record "Still," produced by Wilco's Jeff Tweedy, so of course, I included RT's acoustic cover of a Brtiney Spears track from 14 years ago. Enjoy, good Woodies.

zip
Posted by Sal Nunziato at 5:27 AM

I need more Ellen Foley in my life!

Have you listened to the Richard Thompson record? What think you?

Enjoy the show and the weekend.

I first heard "Scare Easy" in the movie, "Appaloosa" a good ole' Western yarn with a good cast led by Ed Harris & Viggo Mortensen. it usually finds itself in every playlist I make.

That was a good mix for the weekend, many thanks, although yours was just a tad better than mine as you went to see Richard Thompson play!

We need your impressions of the Thompson concert. I was especially impressed by Mr. Jerome when I saw them a few months ago."Can't Win" was a standout ... and I love his sense of humor!