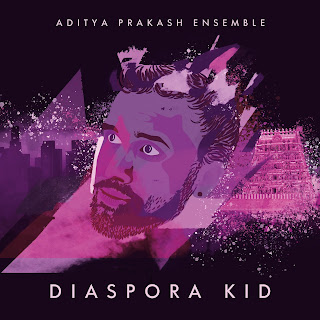 Old school record shopping involved more than just hearing a song on the radio and rushing to your favorite shop to buy the album. Sometimes we bought records for the cover art. Other times, we bought records by artists we didn't know because we recognized and were fans of the members in the band, or maybe even the producer. Occasionally, we trusted a label. I know I did. I'd buy records on the Harvest label from the U.K., or more obviously, Blue Note, because their catalogues seemed to be curated with me in mind.  It was around 2001 when I started trusting Ropeadope Records. After a series of releases covering a wonderful cross section of jazz, funk, hip hop, gospel and blues, by artists such as Charlie Hunter, Dirty Dozen Brass Band, Sex Mob, ?uestlove and Christian McBride for starters, I was hooked and looked forward to each new release and whatever surprise was in store.

I mention this because I generally do not listen to Carnatic music. If you are unfamiliar with the term, Carnatic music is a subgenre of classical music from southern India. But on Friday, March 20, Ropeadope will release "Diaspora Kid" by the Aditya Prakash Ensemble, and only because this is from Ropeadope, did I listen.

And my mind was blown.


I am not of the mind that you cannot write about music, that music needs to be heard. I have been writing about music for a good portion of my life. But there are few words that can truly describe what Aditya Prakash and his band have taken on with "Diaspora Kid." The music here on Prakash's third release, is performed with a passion that is just about non-existent in today's pop world. "Diaspora Kid" is a desperately needed jolt of true emotion and depth, as Prakash draws inspiration from his cross-cultural upbringing in Los Angeles. It pounds and rumbles with both joy and sadness. It is both funky and spiritual.  And most important, the ensemble can play! And man, Prakash can sing!

The opener "Greenwood" is a brilliant hybrid of modern jazz with Radiohead chord changes that actually swings! I fell in love within seconds. "Joy" is three minutes of solid fusion, not unlike the Mahavishnu Orchestra, but with Prakash taking over John McLaughlin's guitar lines with his voice. The video above is the first "single" from the record. Now I began with old school record shopping, and I wonder if the old school me would have considered anything off "Diaspora Kid" singleworthy. But you need to listen to it. If you are moved only half as much as I was, on Friday you will have the chance to head full on into something special.

"Diaspora Kid" is not for the faint of heart, and I say that in the best possible way. This record demands your attention. You know, old school.

I thought that was wonderful - really grabs you by the ears! Something spirited and life affirming is just what's needed right now and I look forward to hearing more. Thank you, Sal.

reminds me of Milton Nascimento and Flora Purim, but more fusion-y