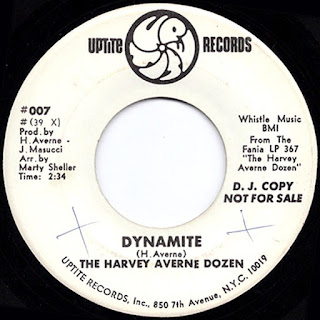 It doesn't happen as much as I'd like it to, not to me and not to any record dealer digging through crates. But when it does, it makes the hunt even more wonderful than it already is. It's that moment you find the gem among stones.

I can't think of anything I love more than digging through boxes of records. But the truth is, no matter how much you know or think you know, you don't know it all. And if I saw this Harvey Averne 45 in a stack of singles, I'd have probably bought it for a few reasons. It's a white label promo. It's Harvey Averne, record producer and part of the band The Chakachas, who had a hit with "Jungle Fever," a song you've heard hundreds of times even if the artist and title isn't ringing a bell. Scroll to the end and jog your memory.

But the real reason to be happy about finding this record is something I didn't know. It sells for $1200.

I once found an original Bud Powell record on the Norgran label. That was Norman Granz' label before he changed it to Verve Records. I paid $1.50 in a thrift shop and sold it within hours for $200. I've had a plenty of moments like that, including finding a copy of the Creme Soda album, one I almost left behind. I'm glad I didn't. Look that one up. I had to. Another $1200 piece of wax.

My buddy found this Harvey Averne 45 in a stack of other not so great 45s. Sold it within minutes.

I did some research. The album itself "The Harvey Averne Dozen" is a Latin boogaloo classic. Very few are out there, and those that are are inferior represses made in Argentina, and even those sell for a $100 or more. Original US issues on the Fania label, go for $300 to $500.

Now, I know many of you are shaking your heads right now. Why on Earth....blah blah blah? I understand. Believe me, I do. The entire album is on Spotify and I think most is on YouTube. But that is hardly the point.

I listened to it all and I loved every second of it. It is now, of course, on my ever growing want list. But I am not reckless. The odds of me spending $300 for this album are just as great as me finding one in a box. But it is just one more example of why I love what I do and one more example of how much great music is out there.

And now, a few faves from the Harvey Averne Dozen.

And don't forget The Chakachas.

I Just purchased a few dozen classical vinyl albums on a FB group (I miss yours) for $5 each. Last night I listened to a Sibelius record and went to Discogs to enter it in my collection. It turns out it's a rare rainbow label Capitol from the late 50's. it goes for around $50. I love when that happens. I'm too terrified to go to a store now, looking forward to getting vaccinated and going shopping again

Thank you Sal for sharing. These are all great.
Again its music that stirs up a setting from another era.
Jungle Fever is one to play loud in the open office environment.
Again thank up for doing this and please keep the education going.
shane

I agree, digging is at least half the pleasure of records. $1 finds I've had over the years include Insect Trust's "Hoboken Saturday Night" and the Elektra version of Keith Relf's first Renaissance album (Discogs only lists the import Island version).

Creme Soda? You mean "Tricky Zingers"? I had no idea that was worth anything, glad I liked enough on it to keep it all these years! At a swap meet in the 80s I bought a bunch of singles, including Gram Parsons (my favorite two-sider of all time is In My Hour of Darkness and Love Hurts), a couple of mono/stereo Big Star singles, and a white label Springsteen (either Spirits in the Night or Blinded by the Light, I can't remember which and it's packed away at the moment) that was mono. They were all kinda scratchy, but I kept 'em all. And I remember buying an obvious John Lennon bootleg, the Adam VIII collection "Roots: John Lennon Sings the Great Rock & Roll Hits", sealed, at BooBoo Records (still around!) in the 70s; judging from what I've read as tip-offs to reprints of this, I may have an original that's worth a pretty penny.
I don't look for music in crates anymore, but it was fun!
C in California