Well, we've got a blizzard just getting underway here in the tri-state area, with projected snow totals ranging from 18 inches to 24 inches. I'm trying to stay positive, but I don't own a snow blower and the thought of digging out is giving me shpilkes. So, in case this is my last post before my heart attacks me mid-shovel, I wanted to go out with two favorites.

It it without question that "I Never Dreamed" by The Cookies and "Baby Baby (I Still Love You)" by The Cinderellas are not only my two very favorite girl group records, but two of my favorite records of all time. They are perfect in every way, with mellifluous melodies, heavenly harmonies and lots of other alliterative awesomeness. 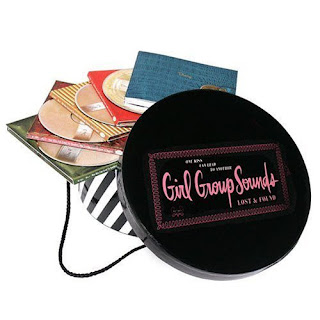 In 2008, Rhino Records released a promotional 45 to coincide with the release of the 4-CD boxed set, "One Kiss Can Lead To Another: Girl Group Sounds," a treasure trove of not-so-obvious singles and rare tracks, all of which are wonderful and occasionally mind-blowing. As luck would have it, the promo-only 45 featured both The Cookies and The Cinderella tracks.

What are the odds?

I decided to listen to both these tracks this weekend and began reading the notes on the back of the sleeve. It was no coincidence. The Cookies--Margaret Ross, Dorothy Jones and Earl-Jean McRea were New York session singers who backed many including Connie Francis and Neil Sedaka. The Cookies were also The Cupcakes. The Honey Bees, The Palisades, and yes...The Cinderellas.

This was not uncommon in the 50's and 60's, but still a surprise to me since I've loved these songs for so long, own both the boxed set and the single, and somehow managed to miss this news that my two favorites were by the same three women.

I know I've written about these songs before, as well as including them on Weekend Mixes. But these two records are worth talking about. They are perfect pop singles and prime examples of the lost art of record-making.

And also, there are no songs called "Please Come And Shovel My F**king Sidewalk" to write about.

great stuff. despite being universal it still defines the sound of the era it was produced.
shane

Sal, please be careful shoveling snow - I don't want a heart attack to keep me from being able to get records from you.

The two songs are wonderful. As for the ode to snow shoveling, that sounds like an opportunity for the John Sally Ride.

Couldn't agree more. Two of the finest examples of the genre. Didn't know they were the same group. I love that kind of stuff.
I can no longer relate to shoveling snow. I'm just shoveling sunshine.

That is one of my favorite box sets.

Except for "Peanut Duck". What a terrible song. :-)

I always love when the ipod is on and one of your mixes is playing and these songs pop up from this box set. I have to stop the gardening and just listen to the glorious harmonies and handclaps.
Have you ever heard of the Hyperions? In back issue of Shindig in their What's Hot on the Turntable this song was listed so I checked it out Youtube. It is a crazy mix with harmonies, production and just a lot of stuff thrown in and sounds like it would fit in. And it is on a quite unusual label.

I share your pain (and the responsibility at my place) for the shoveling. And I suggest the b-side of "Please Come And Shovel My F**king Sidewalk" could be "The F**king Snow Plow Buried My Car."

I share your affection for these records, too. Thanks for the introduction. And I'll be looking into getting that box set.

That's one of my favorite Rhino boxed sets along with Beg! Scream! & Shout! I guess those labors of love were really just playlists in physical form (that's for the kids so they can understand). And like you all I really cared about was the music, no matter how groovy the packaging. But the best ones really did curate and preserve and justify and celebrate so much music I would never have caught any other way. Thanks Rhino!